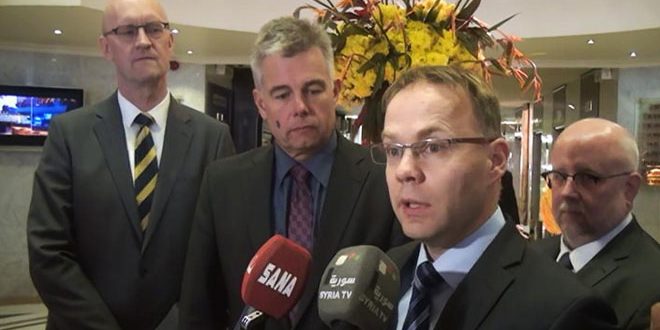 Damascus, SANA- Head of the German parliamentary delegation, Christian Blex, asserted the importance of opening dialogue channels between Syria and Germany to reach a common understanding, calling German and European politicians to visit Syria and inform themselves firsthand and not only by the German media about the situation in it.

In a press statement at the end of a five-day visit to Syria, Dr. Blex said that the visit formed an opportunity for the delegation’s members to inform themselves about all the issues they have planned for, stressing that the warm welcome and hospitality they received exceeded expectations.

About the efforts exerted to lift the unilateral coercive measures imposed on the Syrian People, Blex said that the first step is to convey the true image about what is happening in Syria to the German people and then other steps would come later.