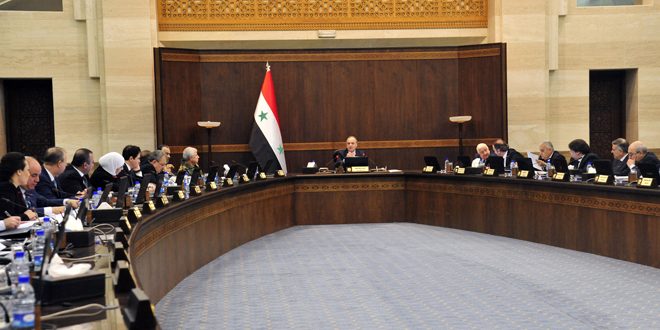 Damascus, SANA – The Cabinet charged on Sunday a number of ministries with following up the implementation of the government’s plan to re-launch all stalled and halted private sector investment projects in all provinces, and to provide facilitations to encourage investors to activate these projects.

In its session chaired by Prime Minister Imad Khamis on Sunday, the Cabinet discussed a bill on defining the duties of the Ministry of Internal Trade and Consumer Protection.

Minister of Social Affairs and Labor Rima al-Qadri submitted a working paper on the human development plan in Deir Ezzor province which was severely affected at various levels by terrorist acts.

The plan, according to the minister, includes two phases: the first is concerned with the rapid social intervention to help the most affected groups, namely the families of the martyrs, the wounded, women, children, the elderly, and the disabled, while the second is concerned with programs for improving the social development indicators in the province and to deal with issues related to education, culture, health, environmental services, and social protection.

At the beginning of the session, the Cabinet offered condolences to the Iranian government and people over the passenger plane crash in Isfahan province, which claimed the lives of 66 people.