Shamkhani: Terrorists and their backers have failed in Syria 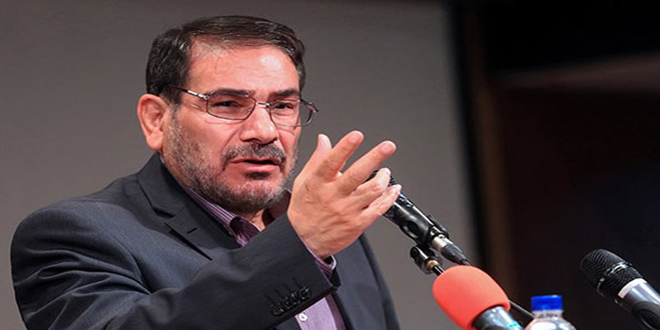 Tehran, SANA- Secretary of the Supreme National Security Council of Iran Ali Shamkhani stressed that terrorists and their backers in Syria have failed in achieving their schemes which aim at toppling the legitimate government.

Speaking in a TV interview, Shamkhani clarified that Iran and Russia are in Syria upon a legitimate request by the Syrian Government to the contrary of the US which constitutes an occupying force.

He demanded the withdrawal of the US forces from Syria, saying “We call upon all the international forums to condemn the US occupation in Syria.”

On the other hand, Shamkhani stressed that Iran today is stronger than ever, and that it will not give up its strategy of supporting the peoples of the region.

He indicated that Iran’s enemies are trying to isolate it “to not become an example to follow by the region’s peoples in depending on its own capabilities.”

He affirmed that Iran will continue to defend the Palestinian people and Lebanese people, and to defend Syria and Iraq.

Shamkhani said that US President’s Donald Trump’s decision to recognize al-Quds (Jerusalem) as capital of the  Zionist entity “has disclosed the secret and public relations between some Arab states and this entity.”

Ambassador Ala: Israel’s continued development of its arsenal, including nuclear, main source of threat to stability of region.