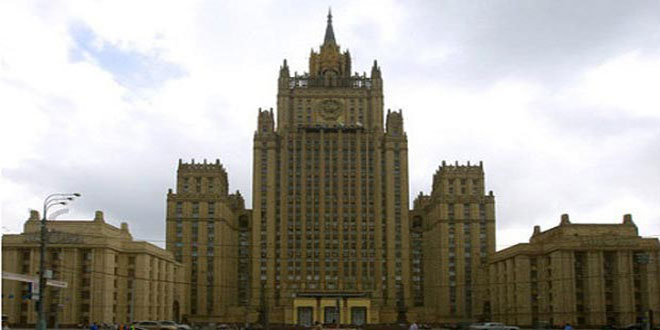 Moscow, SANA- Russian Foreign Ministry said that conclusions of UN-OPCW report which claims the Syrian government responsibility for use of Sarin gas are “baseless”.

The Russian Foreign ministry said in a statement on Saturday that the UN-OPCW report on Khan Sheikhoun focuses solely on justifying the conclusions presented by the US that Damascus is responsible for the chemical attacks and tailors the facts to this version.

The ministry said that the opinions of Russian experts were not taken into consideration during the investigation, though “they are indeed objective, because, unlike the Joint Investigative Mechanism report, they are based on laws of physics, ballistics and technical analysis.” and the conclusions has been published on November 9, in an official document.

“If Mr. Mulet{ Head of the United Nations-Organization for the Prohibition of Chemical Weapons Joint Investigative Mechanism (JIM)} does not agree with them, he should present convincing and well-based objections, instead of engaging in innuendo in his contacts with press,” the ministry added.

Moscow has never attempted to impose its conclusions on the investigation of chemical weapons attacks in Syria on the JIM, the Russian Foreign Ministry said.