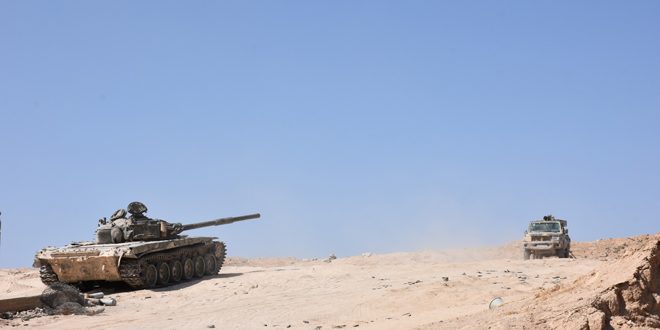 Provinces, SANA- Army units achieved a new advance in the operations against ISIS terrorists in the southeastern countryside of Deir Ezzor, killing one of their prominent leaders at the eastern bank of the Euphrates River.

SANA reporter said that army units established control over new positions on the road of Deir Ezzor- al-Mayadeen after carrying out intensive operations against dens and gatherings of ISIS terrorists.

On the eastern bank of the Euphrates River, army units engaged in violent clashes with ISIS over the past few hours at the axis of Khsham-Hatlet Fouqani, according to the reporter.

Scores of terrorists were killed in the clashes including one of their prominent leaders nicknamed “Abu Osama” of Tunisian nationality.

The Syrian Air Force also participated effectively in supporting land operations launched by the army through carrying out intensive airstrikes and destroying ISIS positions in the villages and towns of al-Jnainieh, al-Hussainyieh, Hatla, Muhassan, Sa’alou, al-Taiba, al-Boulail and al-Salhiyia.

The airstrikes expanded to target positions of ISIS terrorists in neighborhoods of Knamat, al-Hamidyieh, al-Ardi, Khasarat and al-Sheikh Yaseen as a number of terrorists were killed and many of their vehicles and fortifications were destroyed.

Army units regained control of four villages in the besieged area between the countryside of Hama and Homs after eliminating the last ISIS gatherings there.

SANA’s reporter covering the army’s operations in the eastern countryside of Hama said that army units, in cooperation with the supporting forces, engaged in heavy clashes with ISIS terrorists in Abu Hanaya and Hamadi Omar villages, leaving a number of them dead and their hideouts destroyed.

A field commander told SANA,s reporter that army units carried out military operations against terrorist groups positioned in Hamadi Omar village which was considered one of ISIS’ largest hotbeds in the eastern countryside of Hama, resulting in the killing of a number of terrorists while the rest fled.

The commander added that the terrorists used the village’s mosque and its school as army depots and bases for them.

In the next few days, the villages of Hama and Homs are expected to be declared clear of ISIS terrorists, the commander affirmed, adding that torture chambers and prisons set up by ISIS were found inside schools, mosques, silos and civilians’ houses.

The reporter added that army units established fire control over ISIS dens in al-Wadihi and Tweina villages and started a new ground operation to root out the last gatherings of terrorists there.