Update-People killed in terrorist attack on Police Department in Damascus 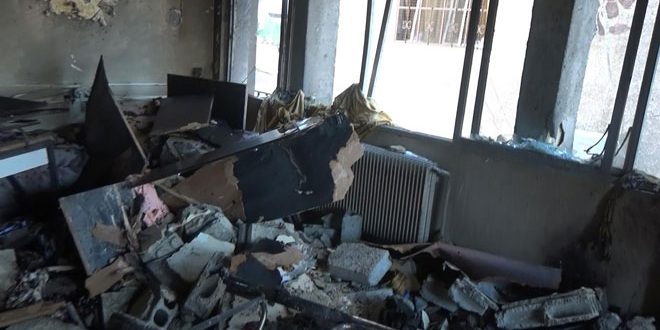 In a statement to reporters while inspecting the attack site, Interior Minister Lt. Gen. Mohammad al-Shaar said two terrorists attacked the guard members at al-Midan Police Department with a number of bombs, causing the death of a number of personnel. After that, one of the terrorists blew himself up with an explosive belt right in front of the main gate of the department.

The Minister added that the other terrorist, also wearing an explosive belt, infiltrated the first floor, where police personnel clashed with him and managed to kill him, causing the explosion of the belt.

Al-Shaar added that the terrorist attack caused the death of a number Internal Security personnel and civilians who were at the department.

Meanwhile,  Information Minister Mohammad Ramez Tourjman affirmed that the terrorist attack on al-Midan Police  Department is a desperate attempt to raise collapsed morale of the terrorist organizations after the large defeats inflicted upon them by the Syrian Arab Army.

Tourjman said in a statement that the terrorist attack that targeted the Syrian civilians came as an  implementation to the instructions of terrorism supporters in the framework of their desperate attempts to prolong the span of the crisis and increase the Syrian people’s suffering.

He called on the international community to take deterrent and punitive measures against the regimes that back terrorism.