Khamis: Syria will continue with the reform approach needed for success of investments 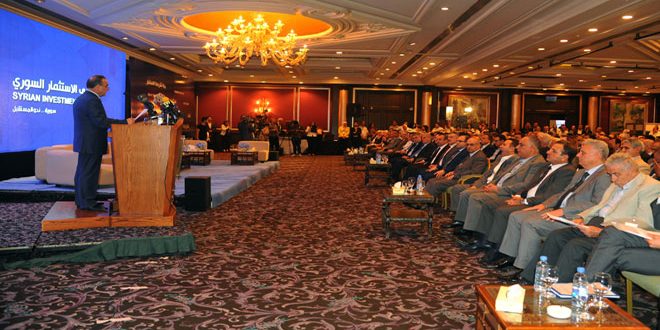 Damascus, SANA- Under the patronage of Prime Minister Imad Khamis, the 1st Syrian Investment Forum kicked off on Monday at the Damascus-based Dama Rose Hotel under the title “Syria, Towards the Future.”

The Forum will focus on prospects of developing and encouraging investments through providing all the required facilitations for them and putting them under implementation.

The Forum is accompanied by an exhibition showcasing investment projects in the domains of tourism, industry, agriculture, transportation, energy, and others, and later dialogue sessions will be held to discuss the investment facilitations and the legislative environment of the investments and finance.

In a statement following the opening of the investment projects exhibition, Premier Khamis said that the Forum is a significant national event which proves to the world the Syria is continuing the process of reform and development under the leadership of President Bashar al-Assad. “Investment can be developed through administrative measures and the concerned institutions which are considered a basic factor for the success of the investment or its failure,” Khamis said.

He asserted the keenness of the government on implementing the national project for administrative reform which was launched by President al-Assad, pointing out that improving the investment environment is a main condition for the success of investment projects and visions.

150 projects are being offered for investment at the Forum, 50 of which are in the tourism sector with an estimated value of around SYP 60 billion.

He said this Forum is an opportunity to announce a new stage in the development of economic activity characterized by the readiness of the Syrian economy to launch a new wave of investments, noting that the government’s efforts over the past period resulted in the return of hundreds of industrial factories back into service and the return of large areas of agricultural land into production, in addition to the reinvesting in many oil fields and gas wells after army regained control over them. Premier Khamis hoped that this Forum will constitute a basis for making decisions that contribute to improving the investment sector, attracting the national and foreign investors and solving all the problems and difficulties that are facing investors.

In a press statement, Information Minister Mohammad Ramez Tourjman said that the Forum sends a message to the private sector and businessmen that “they must be real, positive and active partners alongside the public sector in the reconstruction of Syria.”

Investment facilitations and prospects of funding investment projects were the focus of the first session of the 1st Syrian Investment Forum.

Regarding the Syrian government’s efforts to provide an appropriate investment environment, Premier Khamis stressed keenness to support the establishment of investment projects, adding that a new vision has been adopted to improve the investment infrastructure, not to mention the government’s readiness to offer all legal facilitations, loans and tax exemption procedures to achieve that end. For his part, Minister of Finance Ma’amoun Hamdan underlined efforts exerted by the economic team to further boost the national economy in a way that serves all of Syrian society components.

Chairman of the Federation of the Syrian Chambers of Commerce Ghassan al-Qalla’a said that the current circumstances require new investment law, highlighting the importance of the partnerships between public and private sectors to establish joint projects.

In turn, Head of the Federation of the Syrian Chambers of Industry Fares al-Shehabi said that the forum constitutes a key step to get on the right path

An introductory film, produced by Ministry of Tourism, was screened. The film sheds light on Syria’s ancient civilization and the prominent archaeological sites and tourist attractions as well as the activities of several sectors such as oil, electricity, labor and tourism, in addition to reminding the audience of Syria’s position as an important producer of wheat and agricultural crops in the Middle East.

first forum investment 2017-07-03
ruaa-jazaeri
Share
Previous Update-Kazakh Foreign Ministry: 5th round of Astana talks on Syria to be held on July 4-5 as scheduled
Next Update-Mikdad affirms that Syria disposed of chemical weapons completely