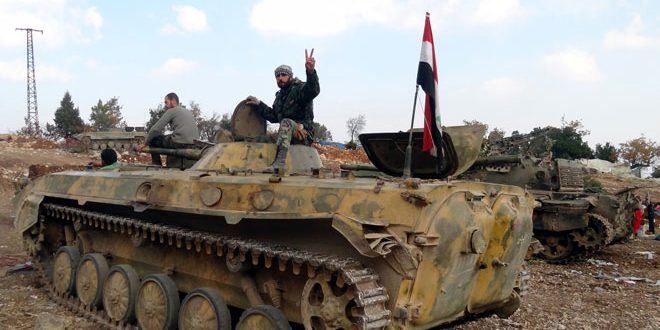 Aleppo/Homs, SANA – Army unit foiled Friday morning a fierce attack launched by ISIS terrorists on a number of military posts in the area between Aleppo’s Khanaser and Hama’s Atherya.

SANA reporter said 20 terrorists were killed and others were injured during the confrontation, while a number of their vehicles were destroyed.

He affirmed that Aleppo-Khanaser-Atherya is totally safe and the traffic movement there is normal.

Meanwhile in Homs, army  units established control over the southern al-Mshairfeh quarry in the eastern countryside of the province after eliminating the last remaining gatherings of ISIS in the area.

A military source told SANA that army units, in cooperation with supporting forces, continued pursuing ISIS terrorists in the eastern countryside of Homs, establishing control over southern al-Mshairfeh quarry and eliminating a number of terrorists.

Army operations 2017-05-12
h.said
Share
Previous President al-Assad to Belarus ONT channel: Russian initiative on de-escalation zones is correct and we supported it from the beginning to protect civilians
Next Syria participates in Baky Islamic Solidarity Games with 28 athletes