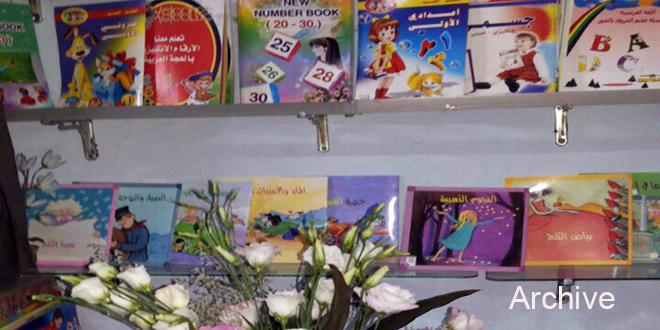 Hama, SANA- The Annual Book Fair was opened on Monday at Salamyieh Book House with the participation of civil, popular and media figures.

The fair, which will last till May 4th, embraces more than 2 thousand books on different educational, literal, historical, political, social, and musical topics, in addition to scientific encyclopedias, international novels and children books and stories.

In a statement to SANA, Director of Salamyieh Book House Hussein al-Haj referred to the artistic diversity of the fair with regard to the social and scientific topics and the new publications.

Al-Haj said that Salamyieh Book House organizes two fairs a year to activate the cultural and knowledge movement in the city, indicating that the fair is witnessing a huge turnout.

A number of those who are attending the fair underlined the importance of holding such fairs as the books are the main source for information and not the internet.
The Salamyieh Book House was established in 1987 and it annually holds a book fair on the occasion of the World Book Day and another fair on the annual anniversary of its inception.