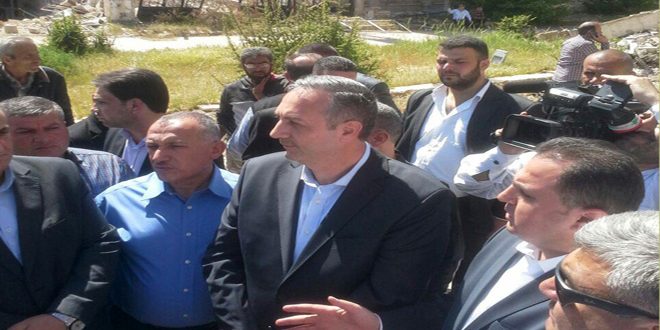 During the visit, Ibrahim told journalists that the services teams of the Governorate and the Services, Sanitations, and Telephone Departments began work on Sunday to restore services and infrastructure gradually to the town, pointing out that infeastrucutre and properties systained massive damage due to terrorist acts.

The Governor said that locals will return to the town after it’s secured and cleared of landmines and IEDs by the Syrian Arab Army’s experts, affirming that the government is ready to resolve the legal status of the militants who left the town.

The first stage of the agreement on ending all armed manifestaitons in al-Zabadani, Madaya, and Boukein in Damascus Countryside and evacuating the people of the terrorists-beseiged Kefraya and al-Foua’a towns in Idleb was completed on Saturday.