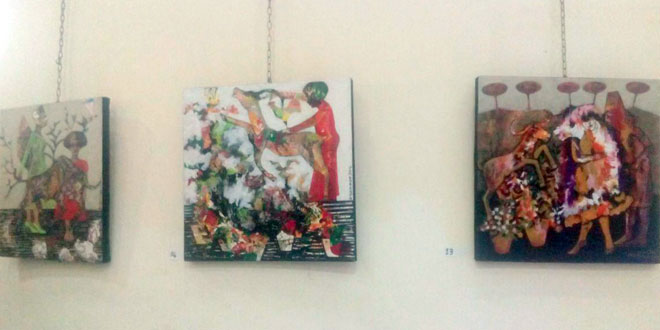 Lattakia, SANA – Syrian women and their important role throughout history were the focal point of Artist Nabil al-Samman’s exhibition held at Haishoon Art Café in Lattakia.

The Café’s walls were covered with 37 paintings of different sizes for Goddess Ishtar, the mother of the martyr, his beloved and his wife who await for his victorious return in which al-Samman found an evidence on the Will to live despite difficult circumstances.

The artist told SANA that the US aggression on Iraq in 2003 was a turning point as it shows that there are parties which seek to erase the identity of the region and globalize horror to turn us into numbers of no identity.

He noted that the exhibition highlights the Syrian’s determination to achieve victory despite the pain and sorrow, adding that he used the expressionist style in which he deployed wide variety of strong colors to convey his thoughts and emotions.

Syrian woman.. Dominating theme of Nabil al-Samman's exhibition in Lattakia 2017-04-08
ghossoun
Share
Previous Speech of Deputized chargé d’affaires of Syria’s delegation during the session of the Security Council
Next Hundreds of Americans demonstrate in New York in protest against US aggression on Syria