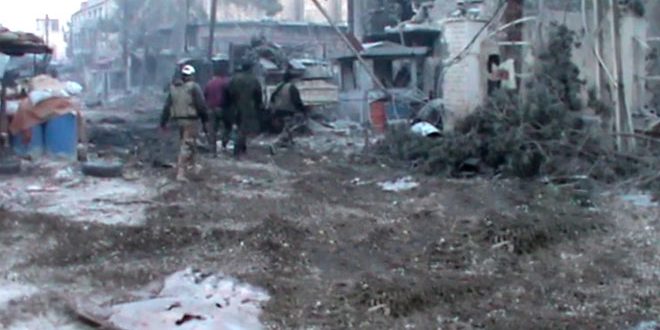 Damascus, SANA – A military source stressed that the army units continue hitting the terrorist groups that infiltrated into the surroundings of Maamel al-Ghazl (spinning factories) north of Jobar on the eastern outskirts of Damascus city.

The source confirmed to SANA in the afternoon that army units have tightened the noose on the infiltrating terrorist groups, which are affiliated to Jabhat al-Nusra, in the surroundings of the factories area, hitting gatherings of terrorists and their movements deep in Jobar
neighborhood.

In the morning, the army units repelled an attack launched by terrorists of Jabhat al-Nusra and other groups affiliated to it on Maghazel al-Naseej area (the textile factories), north of Jobar neighborhood.

The army units engaged in fierce clashes with the infiltrating terrorist groups, the source said, adding that the army has embarked on cleansing the area after the terrorists were hemmed in.

Earlier, SANA reporter said that army units thwarted an attack by Jabhat al-Nusra-linked terrorist groups in the direction of the Electricity Company and the factories area to the north of Jobar.

The reporter noted that the Syrian Air Force carried out intensive strikes on gatherings of terrorists in Jobar.

The Army’s Artillery also hit positions of the terrorist organizations in al-Qaboun neighborhood that were firing shells and sniper bullets on al-Abbassiyeen area and other residential neighborhoods in Damascus.

In the eastern countryside of Homs, the army units killed in intensive operations a number of ISIS terrorists in the areas of al-Bareda , Talet Ayed al-Hassoun, destroying a pickup car equipped with a machinegun in Rihoum village.

Earlier, army units destroyed vehicles for Jabhat al-Nusra terrorists and killed a number of them as their gatherings and positions were targeted in Um Sharshouh village and to the north of Tal Abu al-Sanabel (hill), 18 km north of Homs city, in addition to targeting a number of their fortification points in al-Houleh area, a military source said.

The terrorists Khalid al-Qadi and Mohammad al-Rashad were identified among the dead.

An army unit destroyed three armored vehicles and several fortifications for Jabhat al-Nusra terrorists in the northern countryside of Hama.

The source added that a number of terrorists were killed in the operations.

An army unit killed a number of Jabhat al-Nusra terrorists in Daraa city.

A military source told SANA that an army unit carried out a series of operations against Jabhat al-Nusra terrorists’ movements on the road between al-Mokhaiem and Ghirz prison, killing a number of the terrorists and destroying a tank and a vehicle they had been using.

Army operations 2017-03-21
ghossoun
Share
Previous Tunisian delegation: Tunisian people want ties with Syria to be restored
Next UN: All Syrian parties who already attended previous round of talks confirmed participation in 5th round of Geneva