150 persons from al-Wa’er neighborhood in Homs have their status settled according to amnesty decree No. 15 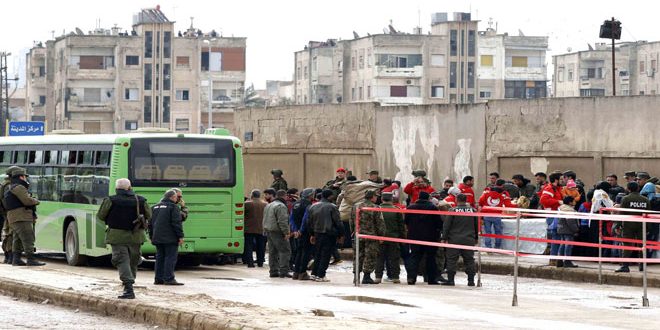 Homs, SANA-150 persons from al-Wa’er neighborhood in Homs had their status settled according to amnesty decree No. 15 for 2016 and in light of the reconciliation agreement reached last Monday.

SANA reporter said that 150 persons turned themselves in to the competent authorities and their cases were settled according to amnesty decree no. 15.

Over 1400 gunmen and members of their families, who rejected to join the agreement, have left al-Waer neighborhood on the western outskirts of Homs city.

They left for the northern countryside of Homs province in the framework of implementing the reconciliation agreement that was reached in the neighborhood, paving the way for the return of all the governmental institutions to it.

150 persons from al-Wa'er neighborhood in Homs have their status settled according to amnesty decree No. 15 2017-03-19
m.eyon
Share
Previous Musical concert brings together veteran and young musicians at Opera House in Damascus
Next Al-Jaafari: Astana track was positive, winning battle of combating terrorism imposed our voice on the world