4 citizens killed, 12 injured in terrorist attacks in many provinces 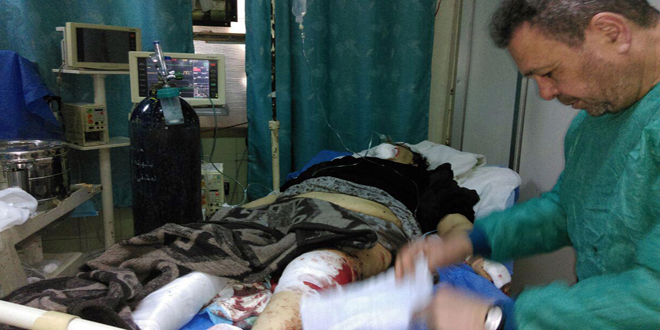 Provinces, SANA – Three citizens were killed and six others were injured in a shelling attack by Jabhat al-Nusra terrorists on three neighborhoods in Daraa city on Friday.

SANA reporter in Daraa said that three citizens, two women among them, were killed and six others were injured, including a child, when terrorist groups affiliated to Jabhat al-Nusra fired a number of rocket shells on citizens’ houses in the neighborhoods of al-Sahari, al-Matar and al-Dahia,

The reporter added that material damage was caused to the citizens’ houses and other properties and the infrastructure in the sites.

A citizen killed, 3 children injured in an explosive device blast in Aleppo

A citizen was killed and three of his children were injured when an explosive device of those left behind by ISIS terrorists went off in the eastern countryside of Aleppo.

SANA reporter in Aleppo said that the blast of an explosive device that was placed by ISIS terrorists between the houses in Barhlin village in al-Bab area claimed the life of a citizen while 3 of his children were severely injured.

Three persons injured due to terrorist rocket attack in Homs

Three persons were injured due to terrorist rocket attack on al-Mal’ab neighborhood in Homs city.

In a statement to SANA, Homs Governor Talal al-Barazi said that terrorist organizations fired two rocket shells on al-Mal’ab neighborhood which fell on the area surrounding the Governorate Palace, injuring three persons and causing material damage to a number of cars.

The Governor denied what has been circulated by some social media websites that he was injured due to the attack.

Terrorist organizations fired a shell on al-Adawi residential neighborhood
in the city of Damascus causing material damage only.

A source at Damascus Police Command told SANA reporter that terrorist organizations positioned in al-Qaboun neighborhood and the Eastern Ghouta fired a rocket shell that fell on a residential building behind Dar al-Shifaa Hospital in al-Adawi neighborhood, causing material damage to the building.