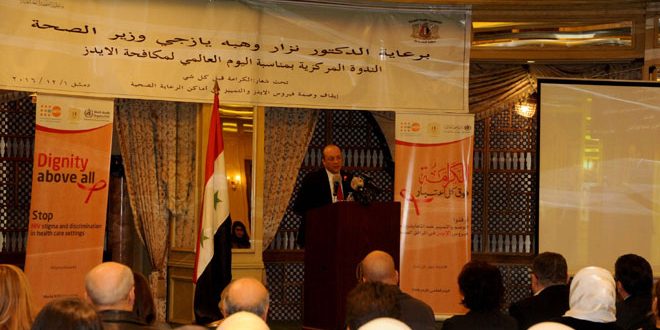 Damascus, SANA – Assistant Health Minister Ahmad Khlifawi said that Syria is still among countries with low prevalence of Human immune-deficiency virus (HIV) epidemic, adding that “since 1987, a total of 863 HIV infection cases were registered of which 535 were Syrians.”

Khlifawi was speaking at the central symposium entitled “Dignity above all – Stop HIV-related Stigma and Discrimination in healthcare facilities”, organized  by the Health Ministry, in cooperation with the World Health Organization (WHO), on the occasion of World anti- AIDS Day at al-Cham Hotel in Damascus.

He noted that the ministry continues to provide free treatment services to AIDS patients and those who have sexually transmitted infections and chronic diseases such as diabetes and hepatitis in order to promote health security despite all challenges.

The Assistant Health Minister added that combating AIDS-related stigma and discrimination is included in the National Strategic Plan to Fight AIDS in Syria with the aim of providing social and psychological support to people living with HIV and AIDS, reaching better understanding of their needs and helping them integrate into society, added Khlifawi, stressing the importance of cooperation with different partners, civil associations and international organizations to reach this goal.

In turn, the director of the National Program for Combating AIDS, Jamal Khamis, underlined endeavors to stop AIDS-related stigma and discrimination through opening voluntary testing and counseling centers and ensuring high quality services at these centers.

Head of the General Women’s Union, Raghda al-Ahmad, appreciated the efforts exerted by the health sector to provide appropriate medical care to all patients and people living with AIDS, noting that the Union has organized more than 250 awareness-raising symposiums on AIDS transmission modes and prevention methods since the beginning of 2016.

Ghada Hijazi from the WHO read the speech on behalf of the WHO Regional Director for the Eastern Mediterranean, Ala Alwan, in which he revealed that till the end of 2015, at least 20% of people living with AIDS in the region know about their status and only 14 % received treatment.

The theme of this year’s campaign in the Eastern Mediterranean Region is “Dignity above all” with the aim of ending stigma and discrimination against people living with HIV and AIDS in healthcare facilities.

According to the UN statistics, HIV infections have fallen by 35% since 2000 (by 58% among children) and AIDS-related deaths have decreased by 42% since the peak in 2004, urging the world to move forward  together to end the AIDS epidemic by 2030.

World AIDS Day is held on the 1st December each year. It is an opportunity for people worldwide to unite in the fight against HIV.