4 civilians killed, many others injured in terrorist rocket attacks on Aleppo’s residential neighborhoods 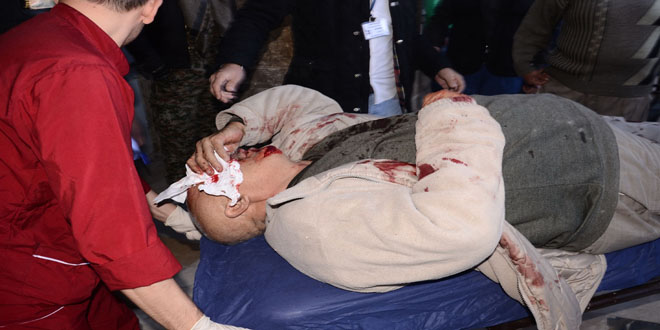 Aleppo, SANA-Four civilians were killed and tens others were injured on Friday due to terrorist rocket attacks on the residential neighborhoods of Aleppo city.

A source at Aleppo Police Command told SANA reporter that 3 civilians were killed and 17 others were injured when terrorist organizations fired rocket shells on the neighborhoods of al-Mohafaza, al-Mogambo, al-Mirdian and al-Furqan.

The source said earlier that 12 citizens were injured when terrorist organizations fired a rocket shell on a temporary housing center in Tishreen Street where tens of families who were liberated by the Syrian Arab Army and the allied forces from the eastern neighborhoods live.

Terrorists also fired a number of rocket shells on the neighborhoods of Maissaloun and Bab al-Faraj, killing a civilian and injuring three others.