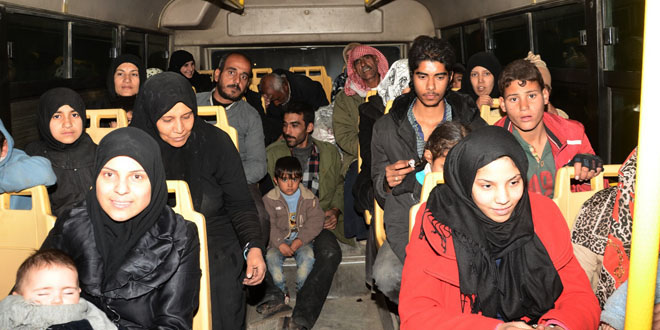 Aleppo, SANA – More locals exited the terrorists-besieged eastern neighborhoods of Aleppo city on Sunday evening, most of them women and children.

SANA’s correspondent in Aleppo said that hundreds managed to leave the eastern neighborhoods in the evening, escaping the clutches of the terrorists as the Syrian Arab Army advances in these neighborhoods. Earlier today, a field commander told SANA’s correspondent that army units secured departure route for 1500 people from Aleppo city’s eastern parts, noting that most of those who left were women and children, adding that the families were transported to makeshift housing centers that have been equipped with all necessary services.

The correspondent quoted a source at Aleppo Governorate as saying that a number of families had managed to leave the eastern neighborhoods making use of the army’s advance in Hanano area, and these people were received by the army personnel and transported to safe areas.

Yesterday, hundreds of locals, most of them women and children, left the besieged neighborhoods of Bustan al-Qassr and al-Salihin in Aleppo city in several groups, and they taken to safe locations and provided with all their needs and requirements.