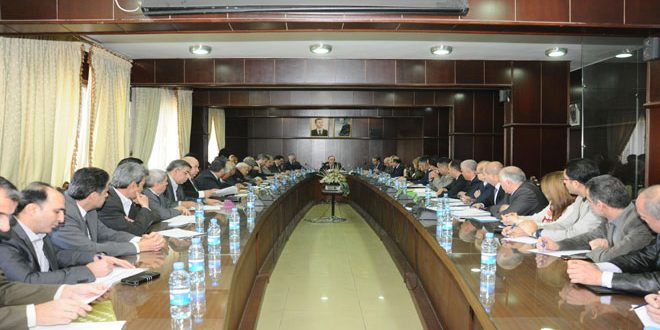 Damascus, SANA – Prime Minister Imad Khamis stressed the government’s keenness on providing all facilitations, legislations and financial support required to make a remarkable  turning point in the industrial production sector as well as the public sector, including small handicrafts which constitute a priority in the government’s plans.

Chairing a meeting at the Ministry of Industry on Thursday, Khamis added that agriculture, industry and trade exchange are essential to the government’s work under current circumstances, indicating that the industrial sector is a main pillar to the national economy and therefore intensive efforts should be exerted to re-run the wheel of production and re-operate facilities in secure areas.

The Premier noted that the main challenge to the Industry Ministry is to find the appropriate work mechanism in order to implement its plans, indicating the importance of partnership between public and private sectors in the current stage.

He called upon general directors and chairmen of the companies and institutions’ boards of directors to set up strategies, plans and administrative training programs to upgrade the institutional work.

Minister of Industry, Ahmad al-Hamo, fir his part reviewed the main obstacles which hinder the implementation of the ministry’s strategies and plans. The participants underlined the need for training administrative managers and adopt a clear vision to enable the industrial sector restore its key role in the national economy through putting an end to the depletion of natural resources, providing production requirements, keeping reserves, making use of human and financial resources and giving priority to industries which depend on local raw materials.

In a statement to journalists, Minister of Finance Ma’amoun Hamdan, said that the discussions focused on the situation of public industrial institutions and challenges facing them as well as the important strategies and plans to improve their administrative and economic performance, noting to the Premier’s instructions to support the public industrial sector with an open budget estimated at nearly SYP 100 billion in 2017.

For his part, Head of General Establishment for Chemical Industries’ Board of Directors, Hassan Zeinab, said that the majority of companies affiliated to the Establishment went out of service due to terrorism, indicating to cooperation with the Cabinet to improve their performance and turn them from loser companies into profitable ones.

Prime Minister: New measures and facilitations to improve industrial sector 2016-11-24
m.eyon
Share
Previous Activities within the National Day of Reading
Next The army destroys a tunnel for terrorists in Harasta