Army regains control over new area in Aleppo, kills a number of terrorists and destroys their positions in various areas 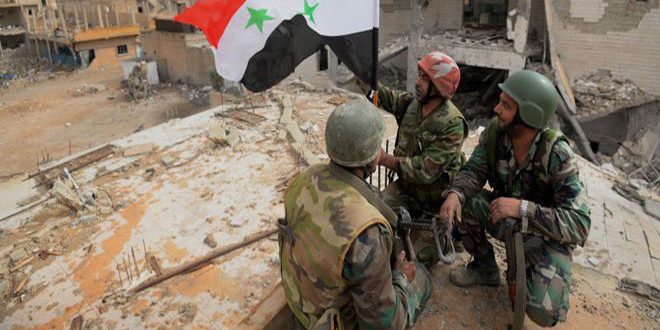 Provinces, SANA- The Army and Armed Forces continued carrying out counter-terrorism operations across the country on Tuesday, with army units regaining full control over the 1070-Apartments project and the surrounding farms and hills southwest Aleppo city.

Army and Armed Forces units, in cooperation with supporting forces, regained full control over the 1070 Apartments project and the farms and hills surrounding it southwest of Aleppo city, according to a military source.

The source told SANA that this was achieved after army units carried out military operations and engaged in heavy clashes with terrorists of Jabhat al-Nusra, the “Turkistani Party,” and other terrorist organizations affiliated to the so-called Jaish al-Fatah.

The source added that 10 SUV vehicles equipped with machineguns were destroyed during the operations, in addition to capturing a number of vehicles including armored ones, killing tens of terrorists, and injuring others.

The source pointed out that army units are chasing the remaining terrorists who are fleeing the area while engineering units are dismantling the explosive devices and landmines that were planted earlier by the terrorists in the area’s buildings and streets.

Army units carried out operations against gatherings and fortifications of terrorist groups affiliated to Jabhat al-Nusra terrorist organization in a number of neighborhoods in Daraa City and in the surroundings of al-Yadouda village in its western countryside.

In Daraa al-Balad, a military source told SANA that an army unit killed a number of terrorists, injured others and destroyed one of their fortified positions in precise bombardments against their gatherings to the east of al-Masri Roundabout, to the west of al-Jumrok al-Qadim “Old Customs” and to the north of al-Nazihin Camp.

The source added that one of the terrorists’ radio-controlled aircrafts was also shot down while flying in the surroundings of the area of Bilal al-Habashi Mosque.

An army unit also carried out bombardments against a gathering of terrorists to the northeast of the silos in al-Yadouda village, 5 km to the west of Daraa City, destroying a number of terrorists’ fortifications and hotbeds and an amount of their arms and ammunition.

The military source said that army units also established control over the route extended from south Drousha to the air defense housing in the east of al-Za’roura/Ashrafiyet al-Abassiya, on the direction of Khan al-Sheeh in Damascus countryside.

A command center and 4 vehicles belonging to terrorist organizations on the road of Beit Jann farm in Damascus countryside were also destroyed.

A military source confirmed that 27 terrorists were killed and 30 others were injured in airstrikes by the Syrian Air Force and artillery fire by the Syrian Arab Army on gatherings of terrorists affiliated to Jaish al-Fateh in Hama province’s northern countryside.

The source said the airstrikes and artillery fire targeted fortified positions and concentrations of terrorists in the villages and towns of Morek, Tibet al-Imam, al-Lahaya, al-Hardaneh, al-Lataminah, Atshan, and Ma’arkabbeh, killing and injuring 57 terrorists and destroying 13 of their vehicles.

Meanwhile, SANA’s correspondent said that army units targeted with precision fire the bases of terrorists from Jaish al-Nassr in Tal sl-Ayyad and al-Arbaeen village in Kafr Zeta area 40 km northwest of Hama city, which left 10 terrorists dead including Ahmad Ezzeddin and injured 5 others.

He added that after monitoring the movements of terrorists from Jaish al-Izza in al-Latamneh, an army unit targeted them and destroyed 2 vehicles, killing and injuring a number of terrorists in the process.

Earlier, units of Army and Armed Forces killed a number of terrorists and destroyed their sites and vehicles in al-Dabour, al-Tiba and al-Mshajar al-Janobi in the countryside of Homs.