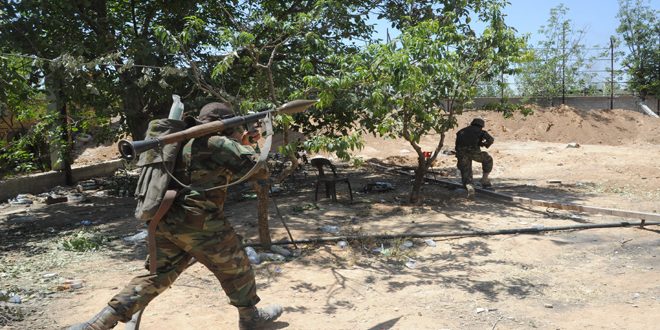 Damascus countryside, SANA- Army units regained full control over al-Taqi Mosque area and its surrounding to the north of Khan al-Sheeh Farms in Damascus countryside, after eliminating a number of terrorists and destroying their weapons, according to a military source.

The source added that an army unit destroyed a 150 meter long tunnel and a command center of the terrorist organizations in Joubar neighborhood in Damascus Countryside.

The army’s air force carried out airstrikes against dens of terrorists in Khani Touman in Aleppo south-western countryside, killing tens of them.

Army units, in cooperation with the supporting forces, thwarted an attack by terrorist groups in the direction of Minian village to the west of Aleppo city, destroying two car bombs for them and killing tens of their members.

The terrorist attack coincided with targeting the neighborhoods of Halab al-Jadida, al-Mogambo and al-Mashariqa and the Faculty of Arts and Humanities with rocket shells and explosive bullets, claiming the lives of 5 people and injuring 46 others, including the cameraman of al-Alam TV channel.

The army’s air force destroyed dens and vehicles for terrorists in al-Rastan and near Deir Foul, Abou al-Tababaer and Khan al-Surah in Homs countryside.

Army units foiled an attack by the ISIS terrorists on military posts in the surroundings Jeb al-Jarrah town in the countryside of Homs central province.

Army units clashed on Thursday morning with a terrorist group affiliated to the ISIS which launched an attack from the direction of Unq al-Hawa village on the military posts on the road of Jeb al-Jarrah town, 73 km to the east of Homs City.

The attack was foiled and a number of the ISIS terrorists were killed, others were injured and the remnants fled away as their arms and ammunition were destroyed.

Earlier, competent authorities in Hama city, while storming a warehouse for terrorists, seized a quantity of weapons, bombs and explosives and lots of poisonous Ammonium in a farm in the southern side of the city.

A police source told SANA that a number of the terrorists were arrested during the storming operation.

The military source confirmed that the artillery bombardment resulted in destroying fortified positions and weapons for terrorists, in addition to killing a number of them.

Meanwhile, the Syrian Air Force launched strikes on fortified sites and positions for terrorist groups in Tallet al-Mintar and Morek, leaving a number of terrorists dead and destroying their weapons and ammunition.

The army destroyed a command center for Jabhat al-Nusra terrorists near al-Masri roundabout and a number of dens in al-Abasyiah and Bahar in Daraa al-Balad, killing a number of terrorists in Yadoudah town in Daraa countryside.

The army units defending Deir Ezzor Airport engaged in fierce clashes with terrorist groups affiliated to ISIS along the eastern fortifications of the airport, killing 9 terrorists and destroying their weapons and ammunition.