President Putin: Attempts to launch a political process in Syria hindered by the US failure to fulfill its obligations 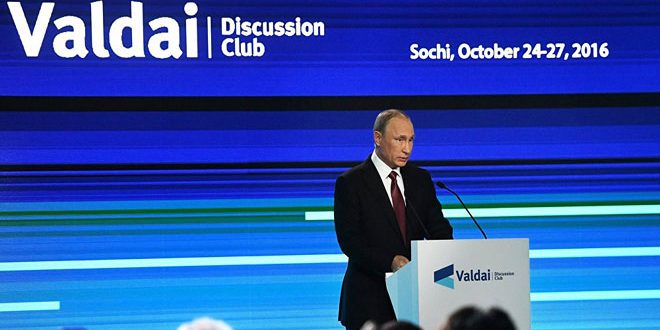 Moscow, SANA – Russian President Vladimir Putin said that the launching of a political process to settle the crisis in Syria has been hindered due to the failure of the US to meet its obligations.

Speaking at the 13th annual Valdai Discussion Club session held Thursday in Sochi, President Putin said “After long negotiations, huge efforts and difficult compromises, a united front against terrorism began to appear, but it did not happen, it, in fact, has not been created and our personal agreements with the US president [Barack Obama] have not worked”.

“There were forces in Washington that did everything possible to make those agreements a failure. This shows an inexplicable, I would say, an irrational desire of Western countries to repeat their mistakes over and over again,” Putin said.

He noted that terrorist groups still receive weapons and support from known states with the aim of using them to achieve their political goals, adding “I would like to appeal once again to these players: extremists are smarter, wiser and stronger than you. You will always lose when ‘flirting’ with them.

The Russian president referred to the western states’ ignorance of Russia’s repeated calls to unify efforts to fight the international threat posed by terrorism.

The Valdai Discussion Club was established in 2004, and seeks to promote dialogue of Russian and international intellectual elites on global political, economic and social developments.