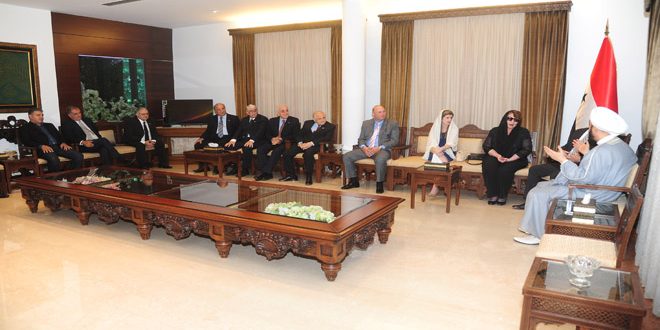 Damascus, SANA – Syria’s Grand Mufti, Sheikh Ahmad Badreddin Hassoun said that the Syrian expatriates are committed to their Homeland by offering their support to the Syrian people.

Meeting the FEARAB Brazil delegation headed by Aziz Jarjour on Sunday, Mufti Hassoun said that Syria is so close to achieve victory over the conspiracy thanks to the people rallying around the Syrian army, the Syrian expatriates’ support and the solidarity of friendly countries around the world. He added that the US attack on a position of the Syrian army in Deir Ezzor stresses the US Administration’s obvious and unlimited support to ISIS terrorist organization, noting that the whole world, over the past six years, has realized that the US is responsible for arming and training terrorists, backed by Saudi Arabia, Qatar and Turkey.

In turn, Jarjour said that the delegation’s visit aims to show the solidarity of FEARAB and the Syrian community in Brazil and Latin America with the Syrian people against this terrorist war.

He underlined the heroism and sacrifices of the Syrian Arab army to defend the country, adding that the delegation will convey the reality of what is taking place on the ground to the public in Brazil and Latin America.

Mufti Hassoun: Syrian expatriates committed to their Homeland 2016-09-18
m.eyon
Share
Previous Armed Groups breach truce regime 16 times in the past 16 hours
Next Four million students head to their schools in the first day of the new school year