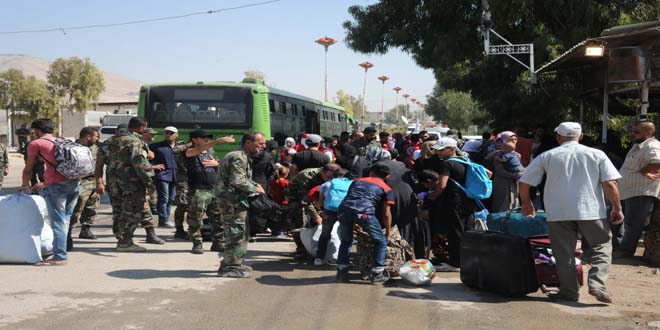 Damascus, SANA – Procedures have been started to transport some 303 people from Daraya city starting from the entrance of al-Moaddamiyeh town, as they will be relocated to the makeshift center in Harjalleh.

Governor of Damascus Countryside Alaa Munir Ibrahim said in a press statement from al-Moaddamiyh: “Today we continue the achievements made by the agreement of Daraya city and evacuate 303 persons from the people of Darya city, including 62 militants who want to settle their legal status and take advantage of the amnesty decree No. 15 for 2016. ”

The governor pointed out that the evacuating the families, transporting them to the temporary housing centers and settling the legal status of the militants are a message to refute what been promoted by media outlets that are partner in the shedding of Syrian blood through groundless rumors.

He added that expanded committees have been formed from the ministers and Damascus Countryside governorate to implement the directives of President Bashar al-Assad and the government’s plan for the reconstruction of what has been damaged by terrorists in Daraya.

The Governor pointed out that the local reconciliations increased dramatically in many areas and soon reconciliation will be reached in the city of al-Moaddamiyh and then Qudsayya, al-Hamah, al-Tal and Wadi Barada.

Marwan Obeid, Head of Daraya Municipality, told SANA reporter that the people who will be evacuated from al-Moaddamiyeh benefited from the Amnesty Decree no. 15 for 2016 that was issued on July 28.

Daraya city, located in the Western Ghouta of Damascus, was fully evacuated of arms and gunmen after a settlement agreement was reached on August 25.

The agreement was implemented over two days where a total of 700 gunmen were evacuated. The militants, who had to lay down their medium and heavy weapons, were taken to the northern Idleb city along with their families.

Some 4000 people were also evacuated and relocated to the makeshift center in Harjalleh, which the Governorate of Damascus Countryside had prepared and equipped with all basic supplies.