Army continues operations across country, establishes control over Bani Zaid and other areas in Aleppo 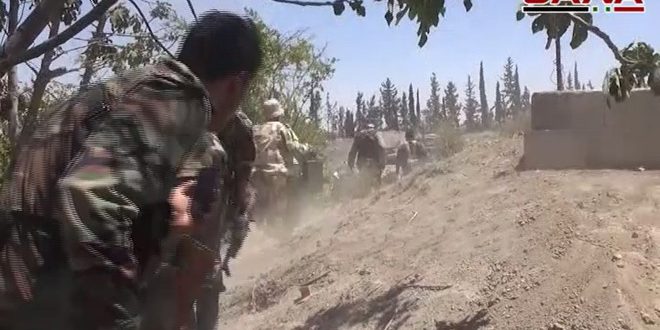 Provinces, SANA The Army units, backed by the supporting units, re-established full control over Bani Zaid neighborhood in Aleppo, adding that the army engineering units dismantled the explosives and mines from its streets and squares, a military source announced Thursday.

The source told SANA that the army established control over Efrin bus station, youth housing and all the building blocks and factories in al-Liramoun in the northern outskirts of Aleppo.

The military operations command in Aleppo, in coordination with Aleppo Governor and Police Command, will adopt the necessary procedures to deliver the factories which the army has controlled in al-Liramoun area to their owners.

The source stressed that the army units continued pursuing the terrorists who fled from the neighborhood, asserting that scores of terrorists turned themselves in and gave up their weapons to the authorities in order to have their situation settled.

Terrorist organizations acknowledged on their social media pages the death of Ammar Shaaban, the so called the military leader of “Nour al-Din al-Zinki” movement in Handarat to the northeast of Aleppo.

The Syrian army air force destroyed ISIS fortified positions and vehicles in Burj Qaei, al-Talila reserve and east of al-Mahata al-Thalitha in the countryside of Homs.

Army units, in cooperation with the popular defense groups, clashed during the past hours fiercely with Jabhat al-Nusra terrorists who attacked, from many directions, al-Zara power plant in Hama southern countryside.

The clashes ended up with foiling the attack after killing 30 terrorists, injuring scores others and destroying a command center, two vehicles equipped with machinegun and a mortar launcher.

The Syrian army air force launched airstrikes on the sites and the gatherings of terrorist organizations in al-Latamina town, Morik city and Skik village in the northern countryside of Hama, inflicting heavy losses on terrorists in personnel and arms.

The airstrikes also destroyed vehicles and fortified sites for terrorists in Hor Binafsoh area in the southern countryside of the province.

In the eastern countryside, the army’s airstrikes targeted ISIS gatherings in Kalib al-Thor village in Salamyiah countryside, killing a number of terrorists, injuring many others and destroying their equipped vehicles.

Army units carried out operations against dens and fortifications of Jabhat al-Nusra terrorists in Daraa al-Balad, inflicting heavy losses in personnel and munitions upon them.

A military source said in a statement to SANA that an army unit destroyed a command center for Jabhat al-Nusra and killed a number of terrorists during accurate strikes against their gatherings in al-Naziheen Camp.

Another army unit destroyed hotbeds of the terrorist organization during an operation against their gatherings and fortifications to the south east of al-Karak Tank, the building of LG Company , the surrounding of Um al-Daraj well in al-Bajabjeh district.
Sweida

An army unit targeted with concentrated strikes a convoy of terrorists’ vehicles in the area surrounding Rami village in the eastern countryside of Sweida, destroying a number of the vehicles, some of which transporting terrorists while the others were equipped with heavy machineguns.