Gate of the Sun event held at Palmyra Amphitheatre 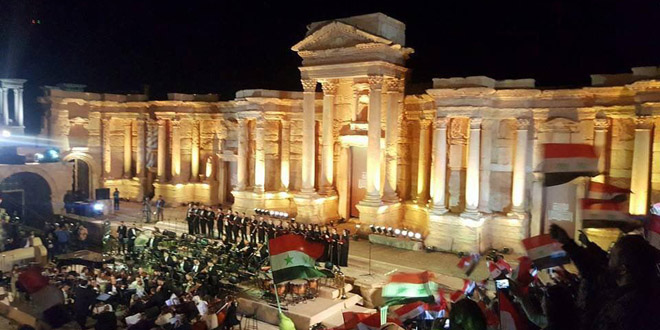 Homs, SANA – Under the auspices of President Bashar al-Assad and as a tribute to martyrs, a cultural event titled “Gate of the Sun” was held on Friday evening at the Palmyra Amphitheatre, with the participation of the Syrian National Symphony, the National Ensemble for Arabic Music, Mari Orchestra, and al-Farah Choir.

The event was attended by families of martyrs from Palmyra and other areas in Syria, Presidency Affairs Minister Mansour Azzam, Tourism Minister Bishr Yazigi, Culture Minister Issam Khalil, representatives of official, popular, cultural, artistic, and media activities, and volunteer teams who gathered at the ancient amphitheatre which seats more than 1,500 people.

The participating groups performed musical pieces and songs for over two hours, beginning with an ode to martyrs, the Syrian National Anthem, a and funerary march by the Police, Army, and Armed Forces Band, conducted by Col. Ezeddin Qassem. Afterwards, the National Ensemble for Arabic Music, conducted by Adnan Fat’hallah, performed pieces including one titled “Palmyra, Gate of the Sun,” while the Syrian National Symphony and the chamber choir of the Higher Institute for Music, conducted by Misak Bagboderian, performed the Triumphal March from the opera Aida by Giuseppe Verdi and two other pieces, and the event was then concluded by the Syrian National Anthem.

In a statement to SANA, Minister Khalil said this event constitutes a letter of appreciation and glorification for the martyrs who gave their lives so that Syria may endure, in addition to sending a message to the world saying that “Syrians are the children of the sun and will continue to shine.”

In turn, Minister Yazigi said that as the Syrian Arab Army brought Palmyra back to its historical context, the Syrian youth with their activities will return it to its humanitarian context, adding that the Palmyra’s martyrs live on in Syrians’ hearts.

He also asserted that the Ministry is working on a plan for the gradual restoration of Palmyra.

Meanwhile, Governor al-Barazi said that Syria will remain the country of love, peace, culture, civilization, and history, stressing that Syria will never accept Takfiris, criminals, and murderers, voicing hope that such events will be held in Aleppo, Deir Ezzor, and Raqqa in the near future.

For his part, Director of the Directorate-General of Archeology and Museums (DGAM) Ma’moun Abdelkarim said that this event is exceptional as it coincides with Martyrs’ Day and it’s held at the amphitheatre which witnessed atrocities committed by ISIS, which proves that the culture of peace and love will triumph over ignorance and murder.

Earlier on Thursday, the Symphony Orchestra of St Petersburg’s Mariinsky Theater from Russia performed at the Palmyra Amphitheatre to mark both Martyrs’ Day in Syria and Victory Day in Russia. 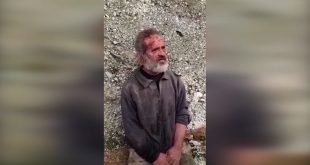