Lavrov: Some players try to frustrate Syrian talks in Geneva 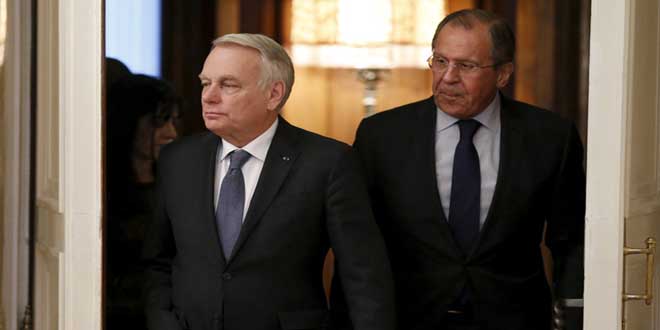 Moscow, SANA – Some countries in the region are trying to derail intra-Syria dialogue in Geneva, Russian Foreign Minister Sergei Lavrov said Tuesday, pointing out that the international community realizes that the crisis in Syrian can only be solved politically.

In a press conference with his French counterpart Jean-Marc Ayrault in Moscow Tuesday, Lavrov added the focus has been on the political solution for Syria as special attention was paid to the political process that has been launched in Geneva.

“We think it necessary to take efforts so that it gains really nationwide character, to have the government and the entire spectrum of the opposition sit down at one negotiating table to decide the future of their home country, which is envisaged by
the United Nations Security Council resolution,” Lavrov said.

He criticized the demeanor of the “Riyadh opposition” group, saying they are being spoiled by foreign backers, such as Turkey, and describing them as being “capricious”.

“Western partners understand that they should not be hostages to capricious participants. The moves to frustrate talks and the return to the military scenario should be stopped in a tough manner,” he said, expressing hope that the UN Special Envoy for Syria Staffan de Mistura practice pressure on “Riyadh opposition”.

The Russian Foreign Minister made it clear that his country insisted on labeling “Ahrar al-Sham” and “Jaish al-Islam” as terrorist organizations but some countries have refused that, pointing out that the cessation of hostilities agreement does not apply to ISIS and Jabhat al-Nusra terrorist organizations in accordance with the Security Council and the International Syria Support Group (ISSG).

In order to address this issue seriously, a list of terrorist organizations should be set, including those trying to sabotage the cessation of hostilities.

“I am convinced that we will soon raise the question in the UN Security Council of including those sabotaging and undermining the truce, but trying to hide under new names, on the terrorist list, along with Islamic State [ISIS] and Jabhat al-Nusra,” he added.

“There is much evidence that Jabhat al-Nusra is mimicking and trying to disguise itself under new names, uniting with small groups not included in terrorist lists, hence, trying to escape retribution,” said Lavrov.

Lavrov indicated that he agreed with his French counterpart to continue work with ISSG to implement the Security Councils’ resolutions, preserve the cessation of hostilities agreement in Syria and cooperate in expanding the delivery of humanitarian aid, expressing hope that France supports maintaining the Syrian state where all spectrums are represented and stability preserved.

In turn, the French Minister Ayrault stressed that there is no military solution to the crisis in Syria and there should be a push forward to reach a political solution.