Palmyra Castle partially damaged due to ISIS acts, plans to restore it to its former glory 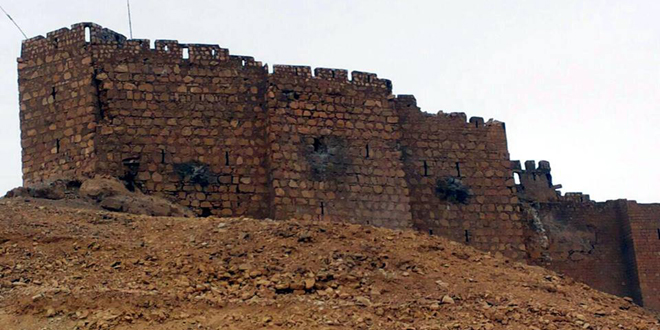 Palmyra, SANA – The archaeological Palmyra Castle was found to have sustained massive damage deliberately inflicted by ISIS terrorists before they have fled deep into Tadmur (Palmyra) city.

While it can only be seen from the outside, the castle seems to have had the stairway leading through its entrance blown up and completely demolished, along with many other parts of the castle’s structure.

It has so far been difficult to reach inside the castle due to the demolition, yet SANA camera was able to take close up shots of the castle from over the hill on which it is located. The damage done to the structure was evident.

SANA reporter however affirmed that a group of army soldiers found a way and managed to enter the castle and made sure its inside has been cleared of explosives.

The castle, which is located in the western part of Palmyra city, came under full control of the army only yesterday afternoon following intensive pinpoint operations to spare the castle any further damage.

The military operation in the area has been in full swing over the past days with the aim to restore security to the city and the archeological site, which ISIS took over last May.

Abdulkarim: Plan to restore Palmyra Castle to its former glory

In a statement to SANA, Abdulkarim added that the whole situation is “reassuring to some extent” and that the damage caused to the internal structure is repairable, which is possible due to the availability of trained and qualified staff capable of restoring the castle to its former glory.

He said that a plan is being set up to carry restoration works, adding that the DGAM intends to send a specialized archaeological team to Palmyra once it is declared safe in order to evaluate the damage caused by ISIS terrorists to its landmarks and rehabilitate them, particularly the temples of Bel and Baalshamin, noting that this will be done and under the supervision of the United Nations Educational, Scientific and Cultural Organization (UNESCO) since Palmyra is listed on its World Heritage List.

It should be noted that restoration work had been conducted to Palmyra Castle in the past by the late researcher Khaled al-Asaad, who was murdered by ISIS.

Abdelkarim pointed out that the DGAM rehabilitated numerous archaeological sites after the Syrian Arab Army restored security and stability to the areas containing them, such as Krak des Chevaliers, not to mention restoration work implemented in Ma’aloula and the Old City in Homs.

Palmyra Castle, or Fakhr-al-Din al-Ma’ani Castle, along with many other archaeological sites in Palmyra, have been vandalized by ISIS terrorists who have also stolen hundreds of archaeological artifacts from the National Museum in the city and destroyed a number of historical landmarks such as the distinctive tower tombs and the iconic Arch of Triumph.