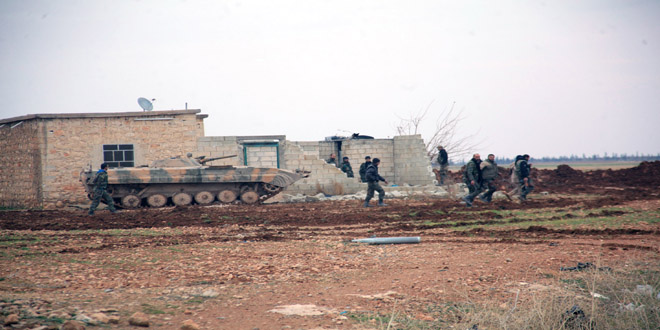 Army units established control over al-Abboudiyeh village, to the southeast of Ein al-Bayda village, and al-Ajouziyeh village in the eastern countryside of Aleppo, sources on the ground told SANA on Wednesday.

The army’s operations resulted in destroying vehicles and sites, in addition to heavy and medium weapons.

The army also inflicted heavy losses upon terrorists in al-Mansoura village and Khirbet Hazmar in the western countryside of the province.

In Aleppo city, a number of terrorists were killed and their weapons and ammunition were destroyed during army operations in the neighborhoods of al-Ameriyeh, al-Rashidin, al-Khalediyeh, al-Lairamoun, al-Kastello and Bani Zaid.

An army unit destroyed arms and weapons for Jabhat al-Nusra terrorists in al-Ameriyeh, located on the southeastern outskirts of Aleppo city.

Army and Armed Forces units, in cooperation with popular defense groups, established full control over all hills overlooking the road between al-Mahasa and al-Qaryatain in the southeast countryside of Homs, a military source told SANA on Friday.

The source said the army carried out concentrated operations against ISIS sites and gatherings in the southeast countryside of Homs, cutting off the main supply routes of the terrorist organization in the area towards al-Manqoura and al-Mahsa areas and al-Qaryatain city, killing a number of ISIS members and destroying their weapons and vehicles in the process.

Later, the source said that an army unit and defense groups targeted concentrations and fortified positions for ISIS in Salam Gharbi village in Jub al-Jarrah area east of Homs city, which resulted in destroying a mortar launcher and a machinegun-equipped car along with the terrorists on board.

A number of terrorists were killed and their arms and weapons were destroyed.

An army unit destroyed a vehicle with all terrorists and weapons inside it on the road between the Meteorology Department Building and al-Sad in Daraa al-Balad area.

To the southeast of Daraa city, an army unit launched strikes against terrorists’ gatherings and positions to the southwest of Gharz Prison, destroying 2 of their vehicles and killing many of them.

The Syrian Arab Army established control over the village of Dwairkeh and Rwaiset al-Nemr in Lattakia’s northeastern countryside after inflicting heavy losses on terrorist organizations, a military source announced on Friday.

The source told SANA that while canvassing the area, army units seized a solar-powered satellite broadcasting station used by terrorists, in addition to a tunnel extending from Rwaiset al-Nemr to al-Rwaiseh al-Jadideh that terrorists had been using to move around, transport weapons and ammo, and evacuate their injured members.

Engineering units also canvassed the area in search of explosive devices and landmines left behind by terrorists, seizing weapons and munitions that terrorists had left behind.