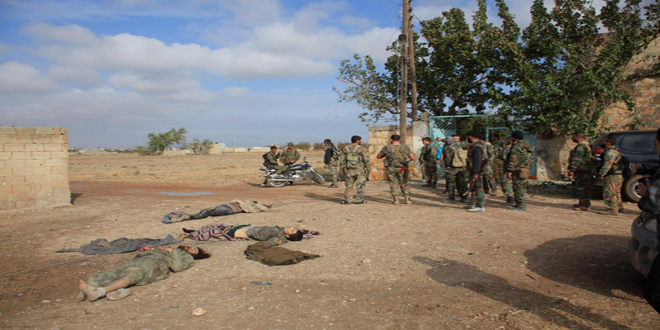 Army units destroyed a number of vehicles and hideouts for terrorists from Jabhat al-Nusra and other organizations who tried to infiltrate towards Oteira Mountain, the hills overlooking al-Burj al-Faransi area, al-Qazghadar Mountain and al-Azar Mountain in the northern countryside of Lattakia, a military source told SANA on Friday.

Dozens of the terrorists were killed and their equipment was destroyed as the army units thwarted their infiltration attempt, the source added.

The army also raided ISIS hideouts and concentrations in Maheen, al-Qaryatin, al-Barida and al-Basiri in Homs south-eastern countryside, killing a number of terrorists and destroying their vehicles and weapons.

The army air force targeted hideouts for Jabhet al-Nusra terrorists in Teir Maala in Homs northern countryside, killing a number of terrorists and destroying their armaments.

The army established control over the areas of Zanouba, northern and southern Kherbat Zanouba and al-Qatshyeh in Homs eastern countryside, a military source said.

The army air force destroyed terrorists’ hideouts in the areas of al-Latamina, Atashan and Jub al-Marade’  near al-Salamyeh in Hama countryside, killing scores of terrorists and destroying their weaponry and munitions.

The engineering units dismantled a number of explosive devices planted by terrorists on roads and between houses before they fled these areas.

Army units also managed to break through an earthen rampart set up by terrorists in the area in a precise operation which resulted in the destruction of two cars, one of them equipped with a machinegun.

Head of the legal body of Ahrar al-Sham Islamic Movement, Mohammad Darwish, was killed in Jisrin village in eastern Ghouta. Three cars were destroyed and a number of terrorists were killed.

On the northern outskirts of eastern Ghouta, an army unit killed three terrorists affiliated to the so-called Islam Army in Harasta farms.

The operations resulted in destroying the hideouts targeted, along with the weapons, ammunition, equipment and vehicles equipped with heavy machineguns existing in the sites.

Another army unit destroyed a hideout for terrorists, killing those inside it, in the area located between the towns of al-Soura and al-Hrak in the eastern countryside of Daraa province.

The army’s air force conducted sorties targeting ISIS headquarters and gatherings of terrorists in al-Ommal and al-Hweiqeh neighborhoods and near al-Furat center in Deir Ezzor city, a military source told SANA on Thursday.

The targets were directly hit, with terrorists getting killed and their weapons and ammunition destroyed, according to the source.

More terrorists were killed or injured and their hideouts were destroyed in army airstrikes in al-Jafreh and al-Mrei’iyeh villages in Mohassan area in the countryside of Deir Ezzor province.

Army units thwarted a terrorist attack by members of ISIS against military checkpoints on the axis of Rasm al-Aboud and Nasrallah villages in the eastern countryside of Aleppo.

Army units clashed with ISIS members, killed dozens of them and destroyed their weapons and vehicles.