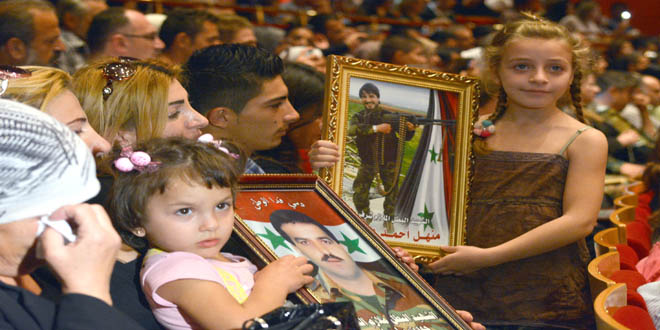 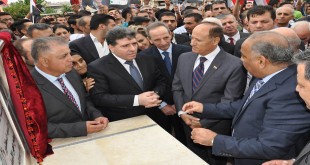 Damascus, SANA – On the occasion of the 42nd anniversary of October Liberation War of 1973, the Syrian Association for the Support of Martyrs’ Families /Tammuz/ held a ceremony to honor hundreds of martyrs’ families at Damascus Opera House on Tuesday. 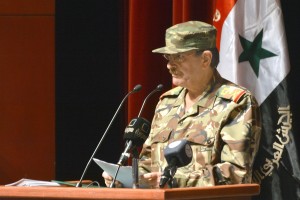 For his part, Syria’s Grand Mufti Ahmad Badr-Eddin Hassoun said “this day is a day of victory in which Late President Hafez al-Assad shone.”

October War refers to the Arab Israeli War that was fought by the coalition of Arab states led by Egypt and Syria against the Isreali occupation enemy from October 6 to 25, 1973. Back then, the Syrian armed forces managed to take an area back from the Israeli forces that had advanced on the Golan. 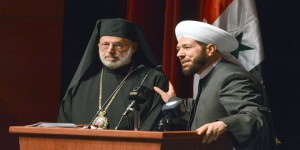 “We are seekers of peace and not seekers of war,” said Hassoun, pointing out that Syria will defeat all its enemies through its unity.

Bishop Luqa al-Khoury, in turn, said the Syrian people believe in God and in their belonging to the homeland, Syria, and they stand united in the same trench to defend it.

The event saw the honoring of 2000 families of martyrs. A short film titled “Word of Honor” was screened, telling the story of a young Syrian officer who leads a military operation with a number of soldiers to release a group of innocent civilians held by an armed terrorist group inside an abandoned school.

Tammuz Association was established in 2012. It aims at offering all possible support to the families of the martyrs and it seeks to activate the civil society’s participation in supporting those families.