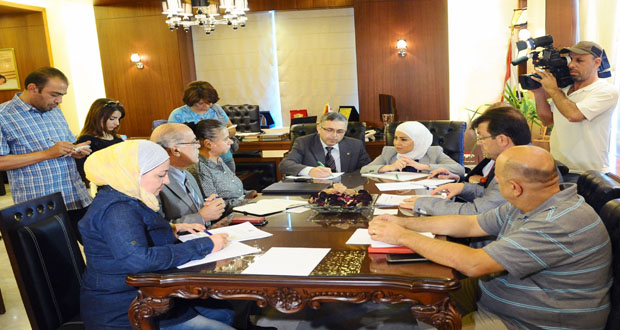 Haidar affirmed that the meeting aims to discuss a mechanism to deliver aid to people in need in Idleb, particularly in al-Foah and Kifraya towns which are under an unjust blockade imposed by armed terrorist organizations, pointing out that the government is doing its best to deliver aid to all Syrians in all Syrian lands. He clarified that terrorist organizations are preventing the arrival of aid to these towns, calling on the international community to carry out its responsibilities to handle this file and find a quick and urgent solutions to deliver aid.

For her part, Deputy Head of the ICRC mission Beatrice Oxley said that ICRC is working on delivering aid and distributing it to all Syrians through SARC. The towns of al-Foah and kifraya have been blockaded by armed terrorist organizations since last April, with a population of 40 thousand
subjected to continuous terrorist attacks with mortar and rocket shells which have claimed the lives of many innocent people.