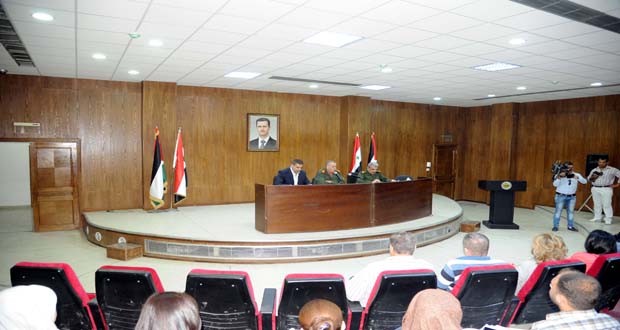 Damascus, SANA-A dialogue symposium, held on Wednesday by Information Ministry in cooperation with Interior Ministry, on the occasion of World anti-Drug day, called for expanding activities which concentrate on the dangers of drugs which pose a threat to the life of dealers and paralyze their energies, particularly the youths who constitute present and future.

Participants in the symposium appealed to work with different sides to raise awareness at the family and to cooperate with civil associations, educational and culture centers to hold activities and forums that contribute to fortifying society against this epidemic.

They also called for establishing a national website to talk about the drugs and monitor this phenomenon as well as cooperate with the competent authorities to inform about any case that will be discovered.

Gen. Mohammad al-Fa’aouri, Head of Information section at the interior ministry said that celebrating the world anti-Drug day on June 26th every year comes as an assertion on Syria’s commitment to face this dangerous epidemic, revealing that 800 million persons are infected by this epidemic intentionally.

He affirmed that the Syrian authorities have seized large quantities of drug tablets left behind the armed terrorist organizations in their dens which were destroyed.

For his part, Gen. Mamoun al-Amouri, chairman of the Interior Department at Anti-Drug section said Syria’s policy towards drugs concentrates on laws which have been developed since 1993 through the issuance of law No. 2 which is considered as one of the most important laws internationally as it set deterrent penalties against drug smugglers, manufacturers and traffickers which could reach capital punishment.

Anti-Drug symposium: Syria committed to combat this dangerous epidemic 2015-06-24
m.eyon
Share
Previous Trilateral meeting of Syria, Iraq and Iran a turning point in cooperation, Tehran says
Next Moscow affirms need for a political solution to the crisis in Syria