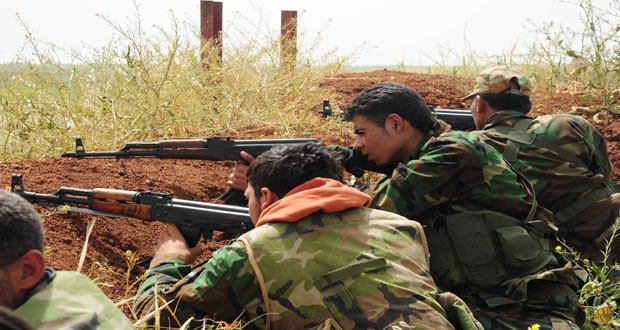 Provinces, SANA – The army continued on Wednesday to target more of the terrorist organizations’ positions in areas across the country, leaving dozens of their members killed or wounded.

The army’s air force destroyed five vehicles for terrorists, equipped with different machine guns, killed a number of terrorists in a series of raids carried out in the surrounding of Jisr al-Shoughour, al-Kfeir, Urm al-Jouz, Bsamis, Samin and Ayn al-Bardeh in Idleb countryside, a military source told SANA.

Army units clashed with terrorists of the Islamic State in Iraq and Syria (ISIS) around the Juvenile Delinquency Institute and the main electricity station and in Sakhr village in the southern countryside of the northeastern Hasaka province.

A source in the province told SANA that the clashes resulted in inflicting heavy losses upon the terrorists.

The source pointed out that ISIS terrorists tried to storm into the Juvenile Delinquency Institute’s building, which is still under construction, using five car bombs.

An ISIS suicide terrorist blew up a car bomb near the main electricity station, causing the station to go out of service.

A military source told SANA said a number of terrorists were killed in the air strikes and their weapons and munitions were destroyed.

In Midland province of Homs, the Army air force launched strikes against the Islamic State of Iraq and Syria (ISIS) dens in the area surrounding Palmyra, al-Sukhna, al-Sawana and Khneifis in the eastern countryside of the province.

The strikes left a number of ISIS terrorist dead.

Meanwhile, the Army airstrikes against the gatherings of Jabhat al-Nusra and other terrorist organizations caused the death of many terrorists and the destruction of a number of their dens in Talbisa, north of the province.

In the northern province of Aleppo, an army unit destroyed dens and supply routes for terrorists to the east of Tayara town in the northern countryside of the province, killing a number of them, a military source said.

More terrorists were killed in al-Wudeiha village in the southern countryside of Aleppo.

To the east of Aleppo city, army units intensively targeted hideouts of ISIS terrorists in the vicinity of the Air Force Academy, inflicting losses upon them.

Inside the city, the army targeted Jabhat al-Nusra positions in the neighborhoods of Bustan al-Qasr, al-Zahraa and al-Lairamoun, killing and injuring a number of terrorists and destroying their arms and ammunition.

A number of terrorists from Jabhat al-Nusra and other Takfiri organizations were killed and others were injured to the east of Rajm al-Mashour near Saida town during an army operation in Daraa eastern countryside, according to a military source .

Meanwhile, an army unit destroyed dens of terrorist organizations to the east of the National Hospital, north of al-Karak neighborhood, and south of Katakit building in Daraa al-Balad area in Daraa city.

A military source told SANA that army units targeted dens of terrorists in Bala farms, Deir Salman, Tal Kurdi, and al-Reehan in the Eastern Ghouta area in Damascus Countryside, killing a number of terrorists, most of them from Jabhat al-Nusra, and injuring others.

Meanwhile, the army’s air force struck dens of terrorists in Douma farms, Joubar, Nashabyia, Dir el-Assafir and Mahsa in Damascus countryside, killing a number of terrorists and injuring many others.

The takfiri terrorist organizations have admitted to the killing of 11 mercenaries in al-Ghouta, all of them were from Jabhat al-Nusra and Jaish al-Islam.