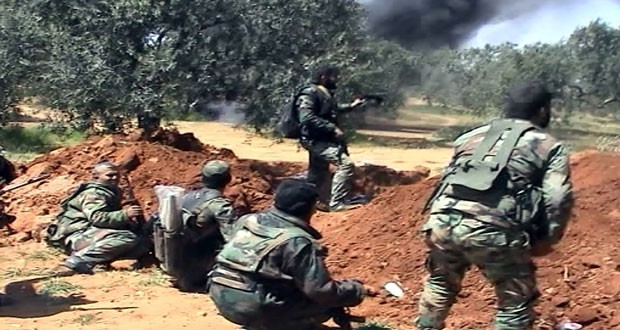 Provinces, SANA –Units of the army and armed forces carried out on Thursday military operations against terrorists’ gatherings and hideouts in many areas across the country, inflicting heavy losses upon them in personnel and equipment.

Army units evacuated their positions in Ariha city in the countryside of Idleb province and withdrew to defensive lines on the outskirts of the city after fierce battles with large numbers of Jabhat al-Nusra terrorists, according to a military source.

The units, earlier, destroyed a number of mortar-launchers for the terrorists during the confrontations in Ariha.

The army’s air force destroyed dens for terrorists and a number of their vehicles, killed several terrorists near Nahlya, Mseibin and Kfar Lata in Idleb countryside.

The army units fought fierce battles with Jabhat al-Nusra terrorists  in Jabal al-Arabaeen, near Mseibin and Kfar Najd in the countryside, inflicting heavy upon them.

In the neighboring Aleppo province, army killed a number of terrorists near the Air Force Academy, Hayan, Kfar Hamra, al-Mislmiya, al-Zahra, al-Jandal and Bustan al-Basha in Aleppo and its countryside.

An army unit repeled a terrorist attack on Jedieh village in the countryside of the southern Daraa province.

Earlier, the army targeted terrorists’ positions on the southern outskirts of Kafer Shams village in the northwestern countryside of the province.

Many terrorists were killed and two mortars and various types of vehicles were destroyed in the operations, a military source confirmed to SANA .

More terrorists were killed in a special operation against their hideouts positioned on the northern hill overlooking Zimrin village in the northwestern countryside.

An army unit carried out a precise operation against Jabhat al-Nusra gatherings in al- Nazihin camp and other areas in the neighborhood of Daraa al-Balad in Daraa city, killing and injuring a number of terrorists.

In the western countryside of the neighboring Quneitra province, an army unit targeted groups of Israeli-backed terrorist organizations in al-Hamidiyeh village, leaving many of them dead and their weapons destroyed.

Army units destroyed dens of ISIS in the area surrounding Deir Ezzor Military Airport and al-Jbeila and al-Sina’a neighborhoods, killing many terrorists and injuring others.