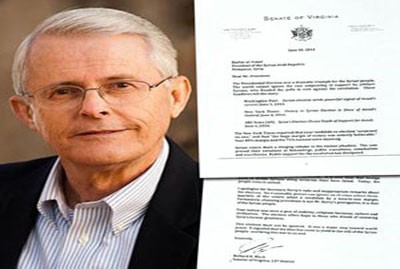 Black considered the elections as a sweeping victory for the Syrian people, saying the world can’t ignore the unlimited support of the jubilant Syrians who flooded to the ballot boxes for voting.

He added the Syrian voters sent a bitter rebuke to the jihadists, saying the elections have proved the Syrians’ disgust of beheadings, executions and acts of crucifixion, affirming it became clear the external conspiracies to divide Syria on an ethnic basis have foiled.

Black said “I apologize for the rude and Inappropriate comments of US Secretary of State John Kerry on the elections… any wise man can’t ignore elections where three quarters of voters select a candidate with a 9 to 1 margin.. Fortunately selecting presidents is not the right of Kerry, but it is the right of Syrian people.”

He added “Your country was once a pearl for stability, religious harmony and civilization… your election stirs hope for those who dream of restoring glory Syria has been enjoying.

The Senator concluded by saying “Any one shouldn’t ignore those elections… They were a main step towards achievement of world peace and an indication that time has come to yield to the Syrian people’s will.” 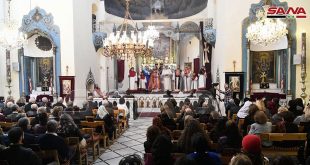