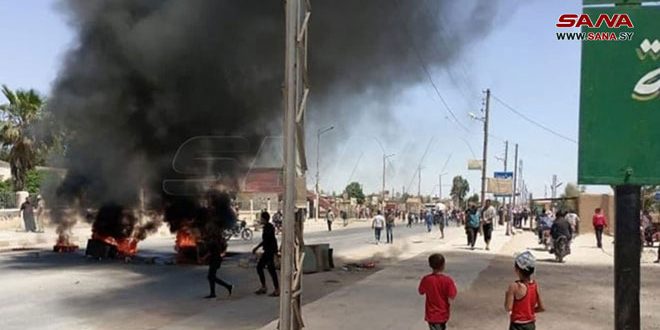 Hasaka, SANA- A number of shop owners in Qamishli market staged a protest in front of one of the US-backed QSD militia dens in rejection of its repressive practices against them and the increase in the royalties imposed on them, which increases financial burdens and threatens them with the inability to continue and close their shops.

SANA reporter in Hasaka stated that the popular anger and discontent against QSD militia has clearly increased during the past months as a result of the repressive practices against citizens in Qamishli and its countryside in terms of arresting young people and kidnapping minors to recruit them in its ranks, in addition to imposing royalties on commercial and craft activities by force, as the militia gunmen extort merchants and workshops owners amounts in some cases to armed robbery.

The reporter added that during the past few days, people of the villages of Youssfiyah and Juneidiyah in Rmelan area staged a protest against QSD militia during which they cut off the main street and detained a military vehicle affiliated to an armed group of the militia.

Hasaka Popular protests QSD militia 2022-04-07
nisreen
Share
Previous 10 ambulances for the Syrian Arab Red Crescent from WHO
Next The Economist: Most of the world’s population lives in countries that are neutral or supportive of Russia