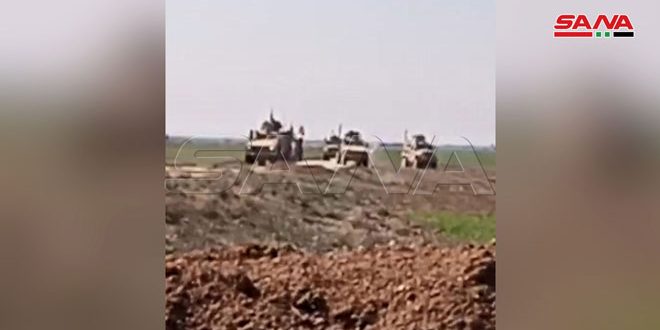 Hasaka, SANA-locals of Salhia Harb village in Hasaka countryside in cooperation of checkpoints of the Syrian Arab Army, intercepted a military convoy affiliated to US occupation and forced it out of the area.

Local sources told SANA reporter that the people of Salhia Harb village in the northern countryside of Hasaka, with support of a checkpoint of the Syrian Arab Army, intercepted a convoy of the American occupation forces, consisting of five military armored vehicles, prevented it from entering the village and expelled it from the area

On the 20th of current month, an army checkpoint stationed near the villages of Qabr al-Saghir and Qabr al-Gharajneh in Tel Tamer district in Hasaka prevented military vehicles of the American occupation forces from entering the two villages and expelled them outside the area.