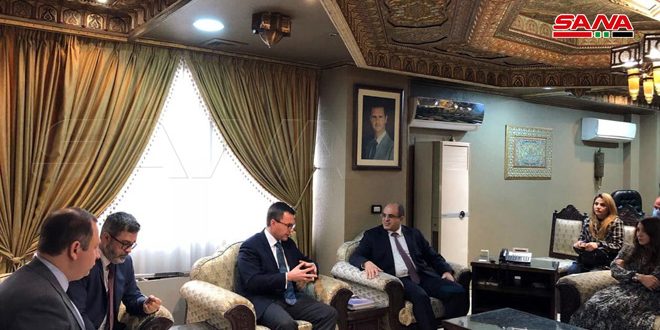 Damascus, SANA-Economy and Foreign Trade Minister, Mohammad Samer al-Khalil, discussed with Director of Institute of World Economy and International Relations , Fyodor Voytolovskiy, and an accompanying delegation , challenges that face the Syrian economy in light of the war and the unilateral coercive economic measures imposed on the country as well as Syrian-Russian relations.

Talks during the meeting also dealt with the possibility of benefiting from the Russian expertise in the domain of micro and medium-sized enterprises.

Khalil said that the Syrian economy also faces international challenges, of which coronavirus epidemic in addition to the high shipment costs , pointing out to the importance of the research centers in enhancing the joint cooperation between the two countries through reviewing the economic situation in Syria.

For his part, Voytolovskiy, said that the Institute is one of the important centers in Russia and offers studies and opinions to the bodies concerned and to the business sectors in Russia, referring to the importance of enhancing investment and commercial relations between the two countries.

2021-12-08
Baraa
Share
Previous Syria calls for eliminating weapons of mass destruction as they pose threat to world peace and security
Next Shaaban: The US tries to invent new tools to rescue one-polar system