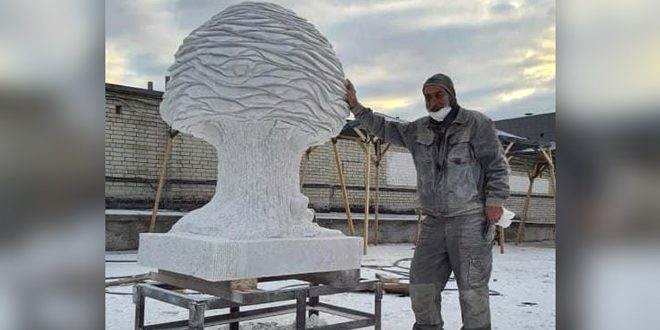 Moscow, SANA- Plastic artist Issa Deeb has brought to mind the famous Newton apple incident in a realistic and expressive manner during his participation with a sculpture at the international forum organized by the Russian Belgorod Technological University.

The sculpture was on the shape of a white block on a base, using alabaster, which is characterized by its extreme whiteness and hardness, deliberately showing the details of the apple tree and the fallen fruits in the form of clear and geometrically parallel lines.

Arab and Russian artists participated in the forum, which was named after the Russian engineer Vladimir Shukhov, one of the world’s leading structural engineering pioneers and designer of the famous Moscow Tower.

“I was invited by Belgorod University to participate in the forum, which is being held on the 60th anniversary of the university’s founding. It was organized under the auspices of the Russian presidency and the head of the Arab-Russian Relations Committee,” artist Deeb told SANA.

Deeb stresses the importance of the participation of Syrian artists in international forums, because every person is an ambassador for his country abroad, affirming the need for the artist, when participating in an activity outside his homeland, to be able to do his work and have extensive experience, as there is no room for experimentation here.