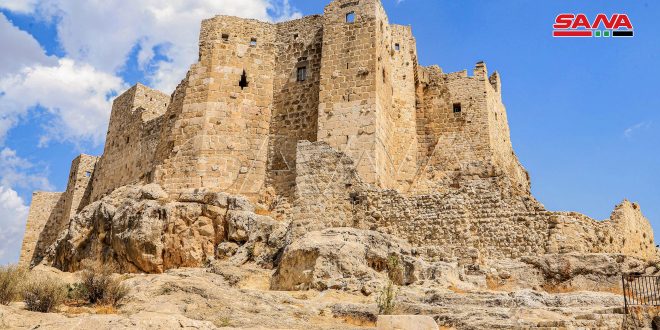 Hama, SANA – The archeological castle of Masyaf is situated in the western countryside of Masyaf city in Hama province.

Masyaf Castle dates back to 44 BC during the Roman period which witnessed building fortifications and military sites to control over main roads of the country, the most famous one is placed on the western mountain ranges.

The castle consists of an inner fortress built over the high southern part of the rocky top of the plateau in a square-like shape. Its corners are distributed roughly rectangular towers with two defensive levels, and in the middle is a heavenly courtyard with a ground level.

The main entrance to the citadel is located in the southwest corner of the outer citadel, it is an Arab-Islamic architectural example consisting of two large halls with a long corridor between them.

2021-09-25
hybah
Share
Previous Minarets of Umayyad Mosque ..Architecture masterpieces which rise up in Damascus sky
Next Syria calls on Indian companies to participate in reconstruction process