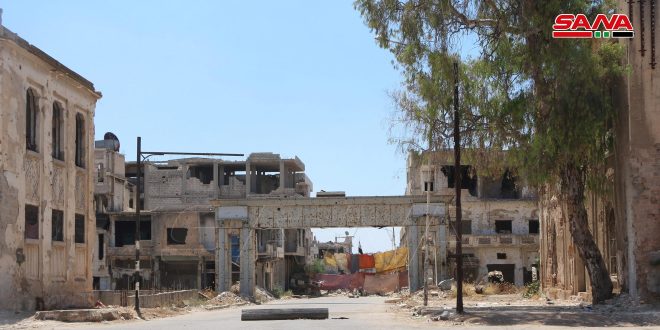 Daraa, SANA-The remnants of terrorist groups positioned in Daraa al-Balad area have launched a shelling attack on residential neighborhoods in Daraa city, causing material damage to a number of houses.

Daraa Governorate Police Commander, Brigadier General Dirar al-Dandal, in a statement to SANA reporter, said that terrorist groups targeted on Monday with about 14 shells, al-Kashef neighborhood, the industrial zone, the fire brigade, and Gharaz area, causing material damage to the houses and infrastructure.

The Police Commander added that the terrorist groups launched an attack against checkpoints for the Syrian Arab Army with machine guns near Hamida al-Tahir Park and al-Mansheya area on the outskirts of Daraa al-Balad, without causing any injuries, pointing out that the operating army units have responded to the sources of the attack.

The remnants of terrorist groups in some areas in Daraa still insist on obstructing all settlement efforts made by the state to establish security and stability throughout the province as on Monday, they attacked residential buildings and they targeted Maysaloon neighborhood on Daraa-Tafas road with a rocket shell, causing damage to the targeted building and its surroundings.