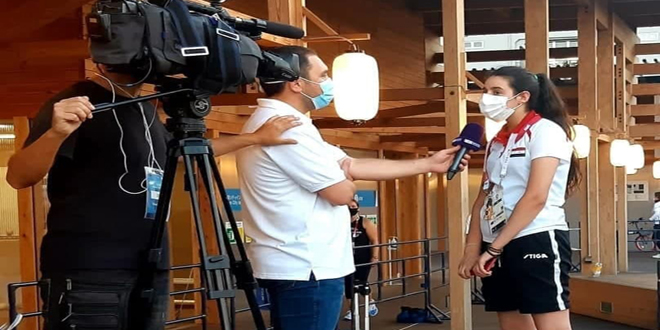 Damascus. SANA- Despite losing, and bidding farewell to the table tennis competition, the 12-year-old Syrian player Hind Zaza grabbed the media spotlight as the youngest female athlete to participate in the Tokyo Summer Olympic Games.

Zaza managed to participate in this Olympics after winning the West Asian Championship. International and Arab TV channels and news agencies interviews with Zaza touched upon her determination to participate in this international sporting event despite the difficulties which Syria is going through due to the war and besiege imposed on it and corona epidemic being spread globally so that the Syrian sport is present in this significant event.

In an exclusive statement to SANA, Zaza said that this participation is so  helpful in context of entering the international competitions, clarifying that other significant events wait for her ,on top Arab Championship in August, Arab Club Champions Cup in September and Asian Table Tennis Championships.

She promised her fans to do her best and harvest new medales at the aforementioned tournaments.

Deir Ezzor, SANA-The US occupation forces have killed three persons in an airdrop which they …