US occupation continues to steal wheat and oil, strengthens it bases in al-Jazeera 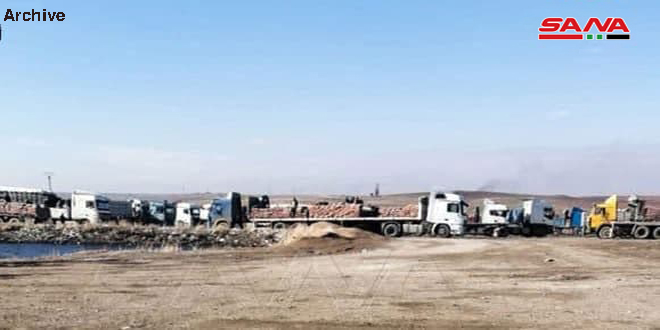 Hasaka, SANA – The US occupation forces have continued to steal the country’s resources as 45 of their vehicles loaded with wheat and oil leaved Rmelan area in Hasaka northeastern countryside in parallel with bringing equipment and logistic materials to support their bases in the province.

Local sources from al-Swaidiyeh village in al-Yarubiya township told SANA reporter that a convoy of 45 trucks and a tanker loaded with wheat and oil left the Rmelan area and entered the illegal al-Waleed crossing heading for northern Iraq.

The sources pointed out that over the past hours, a convoy of 27 US occupation trucks loaded with logistic materials and equipment entered through the same crossing and headed for Rmelan to support the occupation’s forces there.

On Saturday, 37 US occupation trucks laden with stolen oil from the Syrian al-Jazeera region and several trucks and refrigerated tankers left al-Jazeera region heading for the Iraqi territory through al-Walid illegitimate crossing.