Shaaban: Our unity is the decisive response to the enemy’s strategy based on division 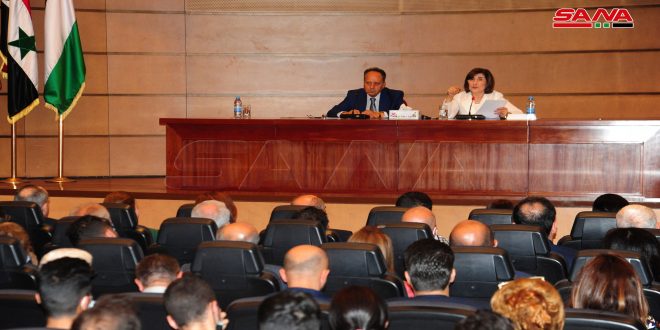 Damascus, SANA- Special Advisor at the Republic Presidency, Bouthaina Shaaban said that Syria has faced a fierce misleading media terrorist war whose aim was always to turn the facts upside down, noting that the Syrian people have stood side by side with the Syrian Arab Army in the fight against fierce terrorism aimed at destroying state institutions and infrastructure in Syria, its civilization and its identity.

Shaaban’s remarks came during a lecture at Damascus University Auditorium on Sunday.

She said that after liberating most of the Syrian territory from terrorism, Israel, US, the countries of colonial Europe and the new Ottoman came and occupied the land after their terrorists failed to accomplish the tasks assigned to them, and the US and the West tightened the economic siege on the Syrian people and prevented their contact with neighboring Arab countries by force of arms.

She noted that a new media was formed in the face of the Zionist and misleading Western media outlets which try to obliterate the truth, thus the occupation crimes were conveyed by the free correspondents who left the razed offices and worked on social media networks to deliver the facts as they are to all those who support the Palestinian right.

Shaaban explained that the lesson learned now is that the enemy’s strategy is based on division between the people of one country and the same nation ,and dividing them into sects, and ethnicities, and that the decisive response to this strategy is the unity among
the Palestinians and their rallying around their central cause and the unity of the Arabs.

Regarding Western stances, she said that the statements of US and Western officials who support the alleged right of Israel to defend itself is a matter of disgust.

In response to questions presented by the audience, Shaaban underlined the priority and importance of liberating regions in the north east and north west of Syria.

She noted that Turkey and Germany had prevented the Syrians from casting their votes because that would have revealed the falseness of their allegations by boasting democracy.