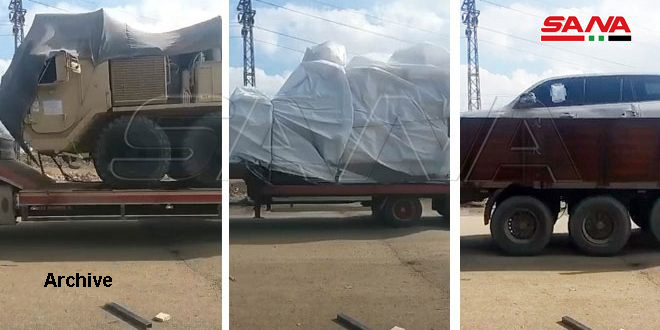 Hasaka, SANA- A convoy of US occupation vehicles loaded with equipment and logistic materials on Thursday entered Hasaka countryside coming from Iraq through the illegitimate al-Waleed crossing.

Local sources from al-Yarubiya told SANA that a convoy which consists of 55 trucks loaded with hidden materials, refrigerated tankers and carriers, accompanied by a number of armored vehicles, entered on Thursday morning from the illegitimate al-Waleed crossing and headed for Rmelan town in Hasaka countryside.

The sources pointed out that the convoy headed later for Rmelan camp, which is used by the US occupation forces and keeps heavy machinery inside.”

In a flagrant violation of the rules of international law, the US occupation forces are working to strengthen their presence in the al-Jazeera region, as they have established bases for them to protect, train and arm of terrorist groups and organizations working under their command.