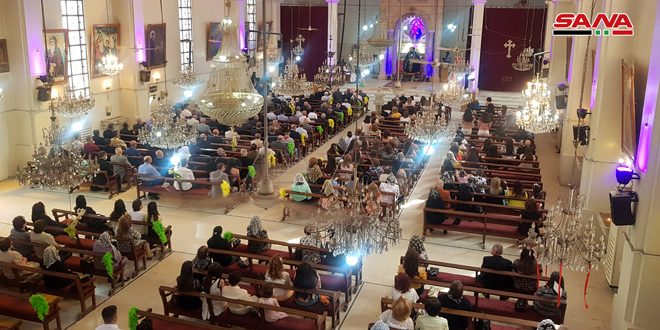 Provinces, SANA- Christian denominations in Syria that follow the Eastern calendar on Sunday celebrated Easter (the resurrection of Jesus Christ) by holding prayers and masses within the precautionary measures adopted to prevent the spread of Coronavirus, praying for God that good and peace will prevail in Syria.

Prayers and masses were held in the Church of the Holy Archangels Michael and Gabriel, Cathedral of Our Lady of the Dormition, St. Nicholas Church and Church of Saint John the Baptist, in Lattakia, and at the Lady of Annunciation Church in Daraa city, and at St. George’s Greek Orthodox Church Patriarchate of Antioch and All the East (Archdiocese of Bosra, Hauran and Jabal al-Arab) in Sweida.

The sermons prayed for god that security and stability will prevail across Syria which has been exposed during the past years for a terrorist war that aims at undermining its stances and steadfastness in facing the western colonial schemes which aims at looting and plundering Syria’s resources.

They also emphasized the importance of wide participation in the presidential elections in terms of enhancing the concept of national sovereignty and rejection of foreign interference in decisions and policies that are represent the rights of the Syrian people alone.

They called on God to protect Syria and its people and that Syria will triumph over terrorism.

Cathedral of Saint George for Syriac Orthodox in Damascus:

Cathedral of the Forty Martyrs of the Roman Orthodox Saints, Homs:

Cathedral of Elijah the Prophet, Aleppo: