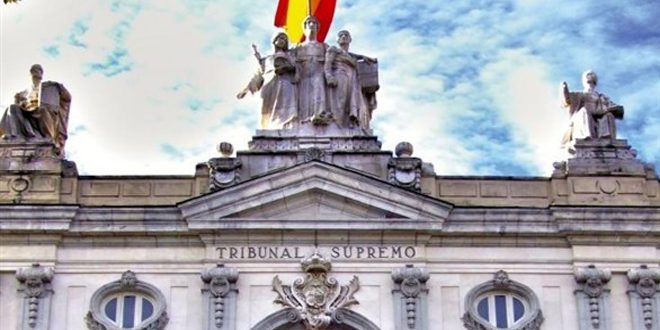 Madrid, SANA- The Supreme National Court in the Spanish capital, Madrid, has begun the trial of a terrorist network composed of 7 persons involved in sending weapons, military uniforms, explosives and money to Jabhat al-Nusra and ISIS “Daesh” terrorist organizations in Syria and Iraq.

Spanish Newspaper EL PAÍS sources indicated that the leader of the terrorist network, a Syrian with Dutch nationality, used his company named “Black Tiger” for the trade of second-hand clothing based in the Spanish coastal city of Alicante in order to export materials to terrorists through the Turkish port of Mersin in containers camouflaged with second-hand clothes and shoes on the basis of that they were sent to refugee camps.

Security investigation sources revealed the existence of at least five shipments and dispatches to terrorist organizations, the last of which was intercepted in the port city of Valencia on the first of March 2016 after the arrest of the leader of the network, where the container contained more than 20,000 military uniforms for the British army, including biological suits.

The Spanish Public Prosecution demanded prison sentences ranging from 18 to 23 years for the leader of the network and the rest of its members for committing the crimes of belonging to a terrorist organization, financing terrorism and money laundering, among other crimes.

The Public Prosecution added to the list of accusations related to the leader of the terrorist network that by searching his tools and electronic devices, pictures were found in which he was shown in Syria carrying weapons of war with other armed individuals, and through the social network / Facebook /, he also published messages calling for extremist ideology and support for terrorist organizations.

European countries have been witnessing a state of security alert for fear of the return of terrorism, which some of those countries have supported and covered its crimes in Syria, especially after the occurrence of terrorist attacks in several European cities, which is something that Syria has repeatedly warned against.