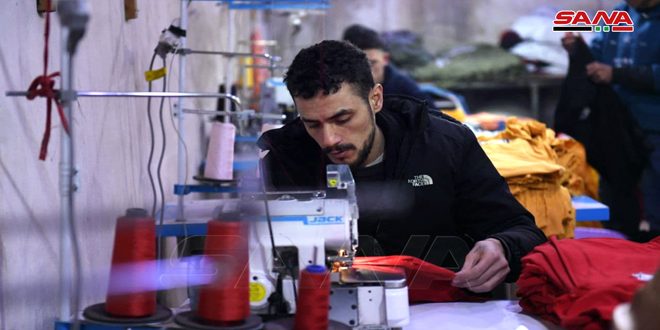 Aleppo, SANA-The injury did not prevent Hakim Nabhan and Muhammad al-Salman, two heroes of the Syrian Arab Army, from intensifying their efforts and defying the difficulties with a firm will and relentless determination. The two heroes, who were demobilized from military service after their injury, cooperated to establish a small project and to open a factory for sewing ready-made clothes and to provide job opportunities for a number of their comrades and individuals in the service of the society.

“I sustained wounds during a battle against terrorist organizations in 2016 in Aleppo, later, he met with Muhammad, who was also injured in the battles against terrorism, and worked together to open a workshop for sewing ready-to-wear clothes, making use of support provided by the The Homeland Wounded program in one of the neighborhoods liberated from terrorism in Aleppo,” Nabhan told SANA.

In Turn, Salman told SANA that he had been injured in a landmine explosion while fighting terrorists in Deir Ezzor governorate. Later, he met Nabhan and decided to open the sewing workshop project.

He added that he and Nabhan are working together to develop their project by purchasing cloths at their expense, cutting out sewing them, producing ready-made clothes and owning a trade mark of their own, calling on all the wounded not to surrender to life difficulties.