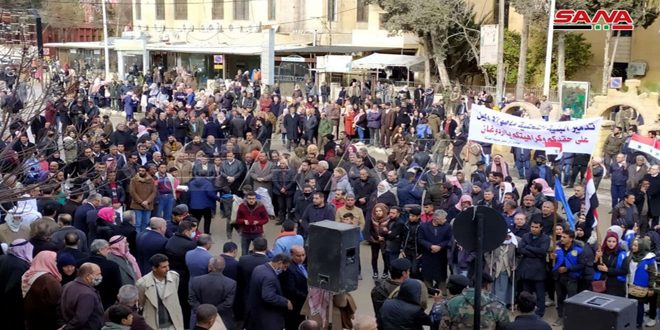 Hasaka, SANA- Citizens of Hasaka city staged a protest against the practices of the Turkish occupation who cut off drinking water and deprived one million people in the city from it. Participants in the protest which was held in the presence of popular activities rejected the violations of the US occupation-backed QSD militia and its attempts to tighten the noose around the people in the city center of Hasaka.

They raised slogans that condemn the violations of the Turkish occupation and its mercenaries and the practices of QSD militia, which implements the agendas of its operators to ensure the continuation of the state of chaos that provides the appropriate atmosphere and conditions for the theft and plunder of the resources of the Syrian people. The participants also denounced the international silence about the violations to which people of Hasaka are exposed , whether by the Turkish occupation or by the militias affliated to the US occupation.

Hasaka locals stage protest in condemnation of cutting off water by Turkish occupation rejection of QSD violations 2021-01-18
ruaa-jazaeri
Share
Previous Ma’aloula municipality rehabilitates the eastern valley and establishes a visitor service center in the town
Next One person martyred, three injured in a mine blast in Hama countryside