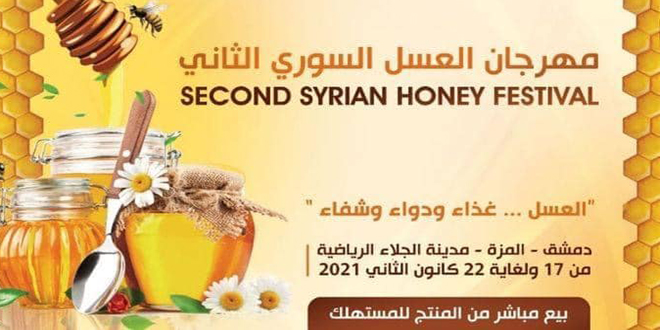 Damascus, SANA- The events of the Second Syrian Honey Festival kick off next Sunday in al-Jalaa city in Damascus and continue till 22nd of this month.

The festival, held by Arab Beekeeper Union (Syria’s Trust) under the name “Honey is a Medicine and Recovery”, includes the Syrian beekeepers’ products of the quality assured and tested honey, and medical and food industries produced by bees, in addition to the production’s requirements and hives.

Head of the Arab Beekeeper Union in Syria, Eng. Eyyad Da’boul, said in a statement to SANA that holding the festival for the second time comes after the great success achieved in its first round, especially that it is the first of its kind in Syria as it succeeded in linking pure honey’s producers immediately with the consumers and cut off the road of the adulterated honey’s promoters.

In turn, director of the union, Eng. Fattouh Jomaa, said that the fair will contain a number of beneficiaries from the projects carried out by Syria’s Trust, who are war injured persons and distinguished beneficiaries, in cooperation with the international organizations.

“The festival aimed at discovering the bees and honey world, creating a direct communication between the seller and consumer, raising awareness of the importance of bee and its products, and supporting the small and medium enterprises operating in the beekeeping field”, Jomaa said.

The first round of Syrian Honey Festival was held on October 24th in 2019 with a participation of 42 Syrian beekeeper, and it witnessed a great turnout.